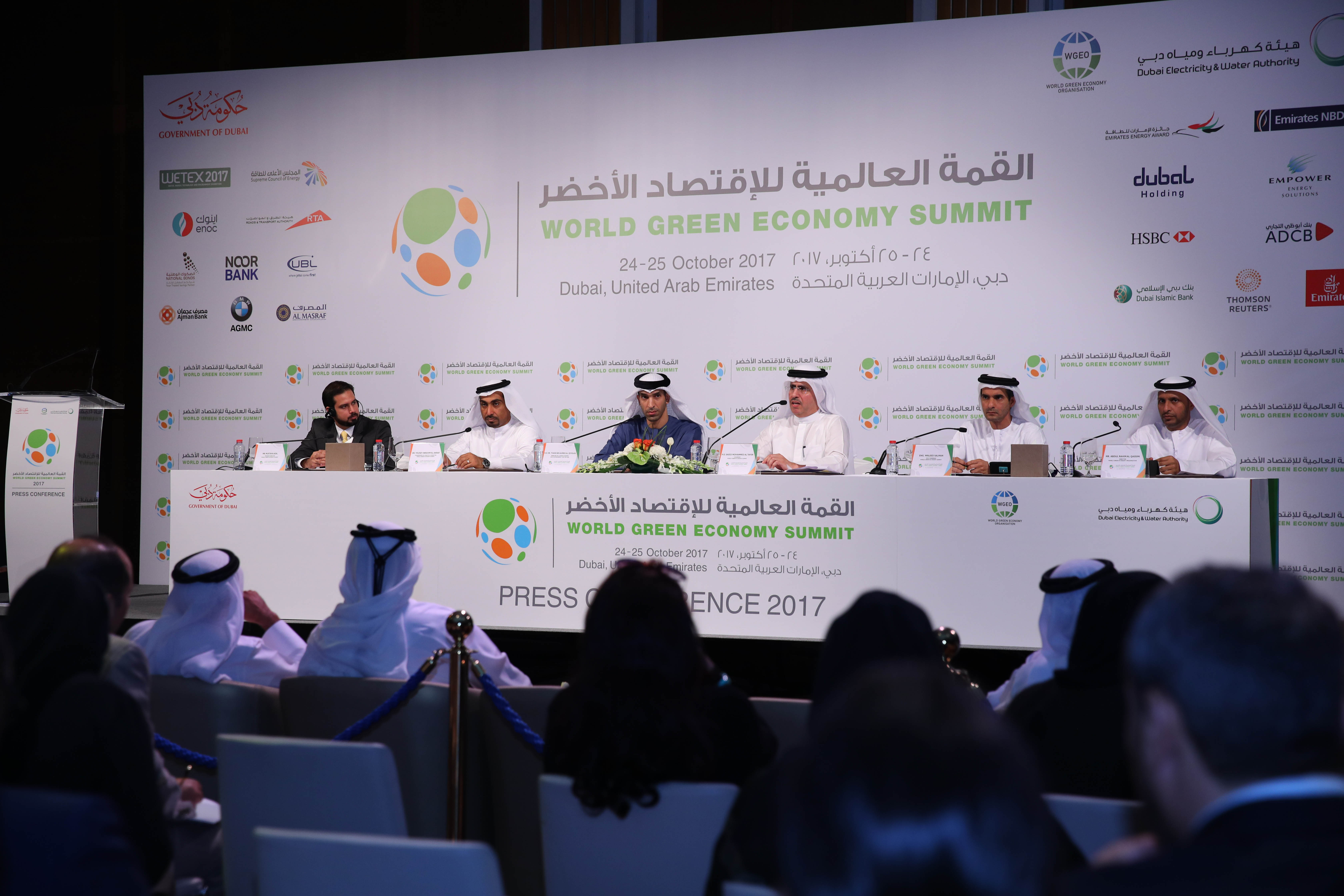 WGES 2017 will create synergies across the social, economic and environmental pillars of sustainable development to help achieve the global agenda of green economy.

Dubai, United Arab Emirates, 19 October 2017: The organising committee of the fourth edition of The World Green Economy Summit (WGES) 2017has organised a press conference today (Thursday, 19th October, 2017) in Emirates Towers hotel to announce the completion of preparations for holding the summit as part of affirming the UAE’s efforts in sustainable development and supporting Dubai’s position as the global capital of green economy.

Held under the patronage of HH Sheikh Mohammed Bin Rashid Al Maktoum, Vice President and Prime Minister of the UAE and Ruler of Dubai,  the fourth edition of WGES 2017is set to be held on 24-25 October at Dubai International Convention and Exhibition Centre under the theme ‘Driving innovation, Leading change’,

During the press conference, HE Dr. Thani Bin Ahmed Al Zeyoudi affirmed that the World Green Economy Summit has established itself as a major annual event locally and internationally to manage the global dialogue on green economy as part of the sustainable development, thanks to the support  given by HH Sheikh Mohammed bin Rashid Al Maktoum, Vice-President and Prime Minister of the UAE and Ruler of Dubai, and the efforts being made DEWA and its partners, both at the organisational level and leading efforts to transform Dubai into a global capital for the green economy in  line with His Highness’ vision.

HE Dr. Thani Bin Ahmed Al Zeyoudi added that this global event represents an ideal platform that attracts more business leaders, policy makers and decision-makers in different sectors each year to crystallize visions and ideas that would further enhance exerted efforts to accelerate the transformation of the global economy into a sustainable and low carbon economy that would contribute to achieving sustainable development goals and combating poverty.

Al Zeyoudinoted that since the adoption of the Green Economy approach under the The UAE Green Growth Strategy2012, the UAE has made significant progress towards achieving green economy.This is bestreflected by the growing and widespread interest of the public and private sectors in this strategy, including finance and investment sectors and the academic community.

“Now, we have an advanced implementation mechanism for the Strategy and national green agenda up to2030, whichthrough its national programmes and initiatives, represents a road map for the transformation process. This strategy has become a key pillar and an important tool in our future initiatives and strategies, in particular the UAE National Climate Change Planadopted by the Cabinet last June”, Al Zeyoudi added

The Minister of Climate Change and the Environment expressed confidence that this summit as previous editions did, would give additional momentum to the national and international efforts being made  to transform the global economy into a sustainable, low-carbon green economy.

“This laudable initiative event first held in 2014, aimed at promoting sustainable development and building a green society. In the past few years, The World Green Economy Summit has served as an indispensable element in driving green economy for a better future for us and for generations to come. We will continue our efforts to further boost our achievements and success,” said HE Saeed Mohammed Al Tayer.

“The World Green Economy Summit is well in line with the directives of His Highness Sheikh Khalifa bin Zayed Al Nahyan, President of the UAE, and His Highness Sheikh Mohammed Bin Rashid Al Maktoum, Vice President and Prime Minister of the UAE and Ruler of Dubai, to boost sustainable development in the country and reaffirm Dubai’s position as a global capital of green economy,” HE Al Tayer added.

“The Summit this year will highlight three key pillars of the green economy – innovation & technology, finance & investment and leadership & policy, which will integrate improvements in resource efficiency to create synergies across the social, economic and environmental pillars of sustainable development. While it will contribute to design new green economy strategies, WGES 2017 will oversee wide participation of decision makers, which will make it a global strategic platform to further increase the momentum and help achieve the global agenda of green economy,” emphasised HE Saeed Mohammed Al Tayer.

“The UAE is a forerunner to achieve the Sustainable Development Goals outlined in the United Nations 2030 Agenda, as many green initiatives form a vital part of the UAE Vision 2021;  ‘A Green Economy for Sustainable Development initiative’ launched by HH Sheikh Mohammed bin Rashid Al Maktoum, as well as Dubai Plan 2021. We also consolidated our efforts to achieve the objectives of The Dubai Clean Energy Strategy 2050 which aims to provide 7% of Dubai’s energy from clean energy sources by 2020. This target will increase to 25% by 2030, and to 75% by 2050,” added HE Al Tayer while addressing the gathering.

“Dubai has lead this change as usual through pioneering efforts in solar energy generation, eco-tourism; regulation of energy efficiency of commercial buildings and installation of more energy-efficient equipment. In addition to that, and to further boost the pioneering role of Dubai in enhancing green economy, sustainable development, inclusiveness of government and nongovernment organisations, the Emirate has launched a series of leading initiatives including the establishment of the World Green Economy Organisation (WGEO), launched by HH Sheikh Mohammed bin Rashid Al Maktoum and in partnership with the United Nations Development Programme (UNDP). Moreover, we’ve launched the Shams Dubai initiative, Dubai Demand Side Strategy 2030, the  Mohammed bin Rashid Al Maktoum Solar Park, Installation of the EV Green Charger and the launch of the USD 27 Billion Green Energy Fund amongst other smart initiatives that demonstrate Dubai’s commitment to COP21 and COP22,” HE Al Tayer added.

HE Al Tayer pointed out while explaining about WGES 2017: “The World Green Economy Summit has attracted a galaxy of speakers this year including CEOs, managing directors, entrepreneurs, andlocal, regional and international leaders. This year, WGES will drive new ideas and technologies. It will comprise of 16 insightful sessions, led by more than 60 prominent speakers, including local, regional and international speakers from different sectors, and supported by more than 25 partners and sponsors.”

In addition, the conference witnessed a speech by Yigit Arslancik, Regional Head of Global Banking, GCC, HSBC who highlighted the significance of partnerships between public and private sectors for promoting sustainable development and green economy.

“Bringing together more than 3000 thought leaders and representatives from various green economy and sustainable development sectors such as administrations, partnerships, financing, innovation and global markets, The World Green Economy Summit will discuss innovative strategies to achieve the global sustainability agenda to further boost the position the UAE as a global green hub,” added HE Al Tayer.

The press conference included a presentation delivered by Mustafa Adel, Programme Director at Thomson Reuters, highlighting an overview of the Summit and key strategies to be discussed at the forum.

Al Tayer concluded by thanking WGES’ sponsors for their continued support to the summit. He also thanked members of the organsing committee and various media members who are playing a prominent role in supporting WGES since its inception.

WGES 2017 will be held in conjunction with the 19th edition of Water, Energy, Technology and Energy Exhibition ‘WETEX 2017’ and the 2nd edition of ‘Dubai Solar Show 2017’, as part of the Green Week activities in Dubai.