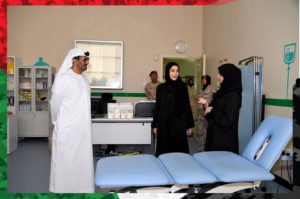 UAE’s female, male students have proven that they are nation’s hope, future: Ministers

AL AIN, 24th July, 2017 (WAM) — Hussain bin Ibrahim Al Hammadi, Minister of Education, and Shamma bint Sohail Faris Al Mazrui, Minister of State for Youth Affairs, stressed that the UAE’s female and male students have proven, through their presence in the fields of honour and military training, that they are the nation’s hope and future.

They also pointed out that Emirati youth have today become a representation of will and determination, and have taken the lead to gain the honour of defending their nation and sacrificing their lives to preserve its accomplishments. The UAE’s leadership takes great care of them, and stressed their desire to plant and establish the values of loyalty, belonging and sacrifice in the hearts of the nation’s children, they added.

This was stated during their visit to the National Service Training Centre in Sieh Al Hama in Al Ain, which was established for the soldiers of the National Service and prepared according to the latest military training standards. They also attended a reception for the founding and advanced volunteer group for 2017, composed of male and female students.

They were received upon their arrival by Staff Major General Faisal Mohammed Al Shehhi, Commander of Solitary Training at Sieh Al Hama, and several high-ranking officers of the armed forces.

Hussain bin Ibrahim Al Hammadi said that the volunteer summer session for school students, launched by the National and Reserve Service Authority following directives from His Highness Sheikh Mohamed bin Zayed Al Nahyan, Crown Prince of Abu Dhabi and Deputy Supreme Commander of the UAE Armed Forces, was organised with a vision to build generations that could be pivotal for the present and the future.

He added that the youth has always been a priority for His Highness Sheikh Mohamed, as part of his vision to establish responsible, leading, thinking and creative generations, who would hold on to their roots and national identity, and at the same time would move forward as important pillars of advancement and development through many initiatives, activities and programmes targeting students.

Shamma bint Sohail Faris AlMazrui said that since the issuing of the National Service Law in 2014 by His President His Highness Sheikh Khalifa bin Zayed, there has been a great demand from the youth to join the National Service Programme and serve the nation. This is a testimony to their patriotism and the desire to serve the country. This was especially evident when even men over 30 years of age and women, who are not eligible for compulsory service, rushed to join the voluntary programme for national service.

Al Mazrui stressed that the National and Reserve Service Authority has proved highly efficient earlier in managing trainees and those who joined the national service. Today, it offers social services by training male and female school students in specialised military cycles during summer vacations to keep them occupied in their spare time and teach them Emirati values of discipline, giving, co-operation and serving the nation.