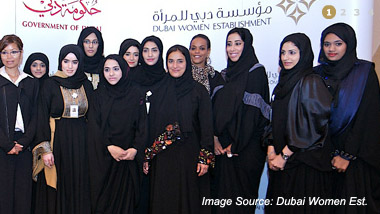 DUBAI, 7th March, 2018 (WAM) — H.H. Sheikha Hind bint Maktoum bin Juma Al Maktoum, wife of The Vice President, Prime Minister and Ruler of Dubai, His Highness Sheikh Mohammed bin Rashid Al Maktoum, stressed that the UAE has presented to the world, the greatest examples of respect for women, caring about their affairs, empowering them, and strengthening their stature as an effective partner in developing the country and building the community with men, in light of support and patronage of the late Sheikh Zayed bin Sultan Al Nahyan, who saw women as a key partner in establishing the nation and its advancement.

In a statement marking the annual International Women’s Day on March 8th, Sheikha Hind highlighted the success of Emirati women, which contributed to the country’s position in leading global competitiveness indexes while reflecting the support and encouragement of the wise leadership, led by President His Highness Sheikh Khalifa bin Zayed Al Nahyan, and his brother, His Highness Sheikh Mohammed bin Rashid, with the monitoring of His Highness Sheikh Mohamed bin Zayed Al Nahyan, Crown Prince of Abu Dhabi and Deputy Supreme Commander of the UAE Armed Forces, for Emirati women, who have empowered them in the area of international competitiveness.

Sheikha Hind pointed out that the success of Emirati women is due to many factors, most notably the ongoing support of H.H. Sheikha Fatima bint Mubarak, Chairwoman of the General Women’s Union (GWU), President of the Supreme Council for Motherhood and Childhood, and Supreme Chairwoman of the Family Development Foundation (FDF), the “Mother of the UAE,” who has helped Emirati women by providing them with the means of raising their stature at Arab and international levels and supporting their progress in many areas, including education, science, the environment, culture, society and volunteering while encouraging their creativity, innovation and overall accomplishment.

Sheikha Hind also honoured the mothers of the martyrs, who represent the highest form of belonging to the nation. “We will not forget, while celebrating International Women’s Day, to remember the honourable stance of the mothers of martyrs, who gave their children to the country to defend its achievements, by providing the greatest examples of belonging and loyalty to the nation through their sacrifice, to guarantee its pride and dignity and raise its flag, confirming the UAE’s role in standing up for everyone’s rights, regardless of the challenges and the price to pay,” she said.


“On the International Women’s Day, we recall the UAE’s humanitarian and relief efforts, which targeted those aggrieved in troubled areas around the world, and the hands that were extended to protect mothers and children affected by wars and disasters, who faced displacement and homelessness. This makes us proud of the UAE, which was and will remain a supporter and champion of the weak, regardless of their crisis or ordeal,” she added.

Fujifilm announces the launch of the elite X-H1