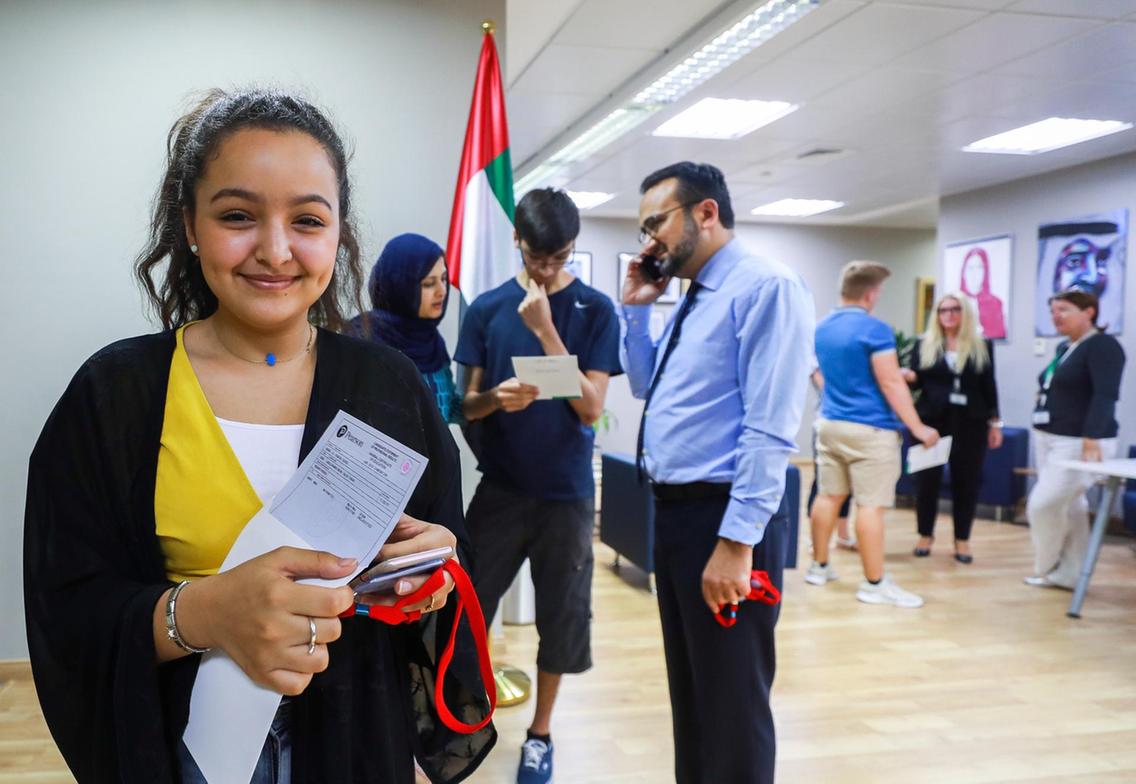 Educators in UAE believe the exams are getting tougher as pupils face the pressure.

A-level exams were tougher than ever this year but pupils in the UAE celebrated their performances and entry to colleges of their choice.

At Jumeirah College in Dubai, parents and pupils paced, nervously waiting for results to be announced. Books listing the grades of sixth-form pupils alphabetically were produced and families queued to find out if their child’s hard work had paid off.

Families celebrated with top institutions such as the University of Oxford, Harvard University, Yale University and London School of Economics on the horizon. And there was no rest – pupils were also inundated with additional material to study for various subjects.

A-level examinations have recently been reformed to have a linear model of exams, where previously exams were conducted in a modular fashion.

With the new A-levels, course-content has been increased, which means children have extended syllabus or information to study.

Previously, children would take their A-levels in chunks but now everything is dependent on the final exams.

In modular exams, the course is divided into different units with an exam at the end of each section. In a linear exam, the examinations are taken at the end of the course.

It marks an improvement for the school since last year and one pupil, Edward Garemo, received eight A*s.

“I think the pupils have responded very well to the A-level changes, even though the exams are tougher as you have to retain the knowledge over two years,” said Mr Corns.


Dubai British School had 56 pupils take A-levels this year, and 40 per cent of the grades were between A* and A, up from 37 per cent last year. Sixty-nine per cent were A* to B, also up from last year by two per cent.

Simon O’Connor, principle of Jumeirah College, said 138 pupils sat over 400 hundred A-levels at the school and 11 per cent achieved an A*, with 41 per cent at either A* or A grade.

Two pupils achieved straight A* grades, with just under 20 per cent achieving all A* and A grades.

“Over the last three years, the entire curriculum has changed. Everything we teach is different. These are new specifications this year and our staff is teaching a course that they haven’t taught before.

“With the new A-levels, course-content has been increased and they are linear now rather than modular,” said, Mr O’Connor.

“Earlier, children would take their A-levels in chunks but now everything is dependent on the final exams. The expectations from A-levels is much greater than it has been in the past in terms of the knowledge required and the way pupils are tested,” he said.

“The exams were during Ramadan and I was fasting. I did not expect this. I never worked so hard before,” said Ms Anwar, who is heading to Princeton University to study public health policy.

“The exams were tough and I was baffled by so many of the questions,” said Ms Anwar.

Jumeirah College pupil Wahaj Munir, 18, also from Pakistan, was delighted with his scores and he is now able to study medicine in London.

The pupil achieved As in chemistry, physics and maths.

His mother, Noor Fatima Munir said she was extremely nervous and happy that her son had gotten into medical school.

Fellow Jumeirah College pupil Tatiana Watrelot, 18, from France, said she was hoping to study psychology at University College London after scoring an A* in the subject.

The pupil said she found the new A-levels “tricky” but teachers helped her out with resources.

“There is still some coursework in subjects like English, which I found very helpful,” said Ms Watrelot.

Amber Harding, 18, from Wales, a pupil at Al Yasmina Academy in Abu Dhabi, got two A*s and two As.

“I’m going to study biomedical sciences in The Netherlands and then apply for a medical course in Europe. All of it was hard work, regardless of changes. I don’t mind one examination but it’s a lot of pressure,” said Ms Harding.

Zaid Jaffrey from Al Yasmina Academy, who earned two A*s and an A, said: “This is a great feeling. I already knew my predicted grades so wasn’t completely surprised, but it’s still so exciting to achieve at this level.”

He will be studying electrical engineering at Imperial College London.

“A-levels are getting tougher and the pressure on pupils is hugely challenging. Pupils have surpassed expectations. This constant change brings challenges as teachers and pupils have to get their heads around new specifications,” he said.