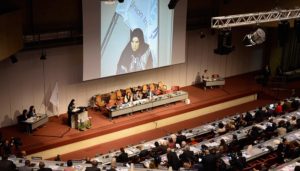 UAE highlights women’s empowerment achievements at the ‘Davos of women’

The efforts and achievements of the UAE in women’s empowerment, driven by country’s leadership, came under the spotlight recently at a global forum for women with Dr. Maytha bint Salem Al Shamsi, Minister of State, giving a wide-ranging presentation about government-funded programmes seeking to put women at the centre of sustainable economic development.

In a speech delivered at the 2017 Global Summit of Women- the premier business and economic forum for women globally since 1990 that is billed the Davos of women – the minister highlighted the effective role H.H. Sheikha Fatima bint Mubarak, Chairwoman of the General Women’s Union, Supreme Chairwoman of the Family Development Foundation and President of the Supreme Council for Motherhood and Childhood, in empowering women as key partners in the overall development taking place in the UAE.

The Khalifa Fund for Enterprise Development and Dubai SME, an arm of the emirate’s Department of Economic Development, were cited by Al Shamsi as major supporters of youth entrepreneurs and generally the small and medium business community involving both men and women.

Al Shamsi highlighted Amal, a Khalifa Fund initiative launched in 2011 to empower Emirati people with special needs to transform them from passive receipts of social care into proactive partners of social development.

Most recently, in April, Vice President, Prime Minister of the UAE and Ruler of Dubai, His Highness Sheikh Mohammed bin Rashid Al Maktoum, launched the National Policy for Empowering People with Disabilities, a six-part strategy involving policy involves health and rehabilitation, education, employment, mobility, social protection and family empowerment, and public life and sports. The policy, she noted, aims to create an inclusive society for those with special needs and their families, she noted.

According to the new strategy, people with disabilities will be instead officially called “people of determination”, Al Shamsi added.

Female government and business leaders from over 60 countries gathered at the Global Summit of Women in Tokyo that began Thursday to discuss how to accelerate women’s economic progress worldwide.

Now in its 27th year, the Summit was conceived as the nexus at which all sectors – public, private and nonprofit – would come together under the common vision of dramatically expanding women’s economic opportunities globally through exchanges of working solutions and creative strategies forged by women leaders in different parts of the world. It is a business summit, whose ‘business’ focus is women’s advancement in the global economy.