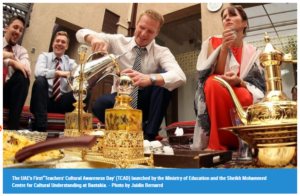 Teachers learn to bridge the cultural divide in UAE

More 500 new teacher recruits – set to join some of the 426 government schools across the Northern Emirates – participated in cultural induction workshops at the Sheikh Mohammed Centre for Cultural Understanding (SMCCU).

Being a new teacher in a new school can be a daunting experience. But when you throw a whole new country into the mix, the shock of different customs and cultures can be hard for some to adjust to.

What clothes can I wear in class? Will the children understand my accent? These are just some of the basic questions new teachers have been raising to Khaleej Times. But one big concern was if schools provided any sort of introduction to the customs and cultures of the UAE? Well, yes.

For more than 500 new teacher recruits here, the Ministry of Education in collaboration with the Sheikh Mohammed Centre for Cultural Understanding (SMCCU), have been doing just that.

In a first, the two entities have come together to host cultural induction workshops ahead of the new academic year, to help ease the transition period for new teachers.

The new recruits will be joining some of the 426 government schools across the Northern Emirates, and Geraldine Craven, learning and development specialist at the ministry, told Khaleej Times why such specialised workshops are essential at this phase. “Our teachers, unlike in international private schools, are teaching 99 per cent Emirati students. They have to be completely immersed in their culture in order to build that rapport with them.”

Of the 500 new additions this year, Craven said they vary in terms of nationality, but they are mostly from the UK, Ireland, the US, Canada, South Africa, Jordan and other Arabic countries.

“When I approached the SMCCU, I came with a list of “can you make sure this is covered”. That list touched on things like dress code, not being irreverent to the country or the government etc.”

But what the Centre did was convey the message in a much more “holistic way”, she said.

“This workshop provides a natural learning process, one which doesn’t scare the teachers off with hordes of information. This is a very forgiving culture, so it’s not about knowing what not to do, it’s about learning how to adjust and filter into the culture.”

After touching down in the UAE just five days ago, Irish expatriate Malachy Sheeran, a PE teacher heading to Ras Al Khaimah, said he had some reservations before coming here.

“I thought it was going to be a lot more conservative, but it’s been overwhelming how welcoming the people are. This workshop has put a lot of us teachers at ease. And really, what we’re learning is mostly just down to common sense and respect.”After teaching English as a foreign language (TEFL) in several countries before, he said the induction class has been “great preparation” for the next step. “They have prepared us very well and have breached that cultural divide.”

Making the transition from a private school on the outskirts of Dubai to the Muath Bin Jabal High School in Sharjah, Mark Smith, lead PE teacher trainer, said it was opportunity that urged him to make the move. “An exciting new initiative has been launched by the ministry in terms of PE so the role I’ve taken on is a step-up in my career.”

At his old school, around 80 per cent of the students were Emirati, so Smith said he is “well adjusted” to the cultural norms here. But although he has been living in Dubai for four years, he said the SMCCU workshop gave him the opportunity to pose one question to the presenters.

“I wanted to find out the best way to interact with parents during parents evening. Things like ‘do you shake a woman’s hand’ which I’ve since learned, you don’t.”

Speaking to Khaleej Times, Rashid Al Tamimi, senior presenter at the SMCCU, said the induction workshops are all about “dispelling the myths” of the UAE.

“This is the teachers’ chance to ask questions and get the answers from an Emirati perspective. Being transparent like this makes it much easier for them in the future to deal with our children in schools, and vice versa, for our children to interact with them.”

“I speak little Arabic, I know some basics, but this is my chance to strike up a relationship with my students and learn from them.”

Initially, she worried that her accent could be a barrier for some students, but she said it’s all about technique. “If you just speak clearly and slowly, I’m sure the adjustment period will be smooth.”

And after Wednesday’s workshop, she said she had decided to wear an abaya in the classroom, too.