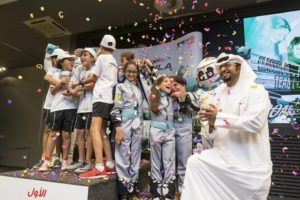 ABU DHABI // Confetti rained over Kareem Hanafieh and his teammates as they stood on the first-place podium hoisting their trophy in the air.

Winning a model racing car challenge came as a surprise for the Al Yasmina School pupils following a long day of competitions against their peers at Yas Marina Circuit on Saturday in the Formula Ethara competition.

“I’m feeling on top of the world right now, over the moon. I’m so happy for all our hard work and everything we put into this,” said nine-year-old Kareem as he stood grinning, surrounded by members of Team Eagle Eye. “It’s just an amazing feeling you get when you win something after putting in many weeks of work and hard effort.”

The Year 5 boys made up one of 31 teams of 148 pupils from public and private schools across the country to take part in the annual competition.

Formula Ethara, which is open to pupils from Grade 6 and earlier, challenges teams of up to four to design and build a model racing car, develop a brand around their product, solicit corporate sponsorships to cover team uniforms and marketing material, present their concept to judges and, ultimately, win the race.

The Golden Speed Stars, a team of girls from a private school in Al Dhafra Region, swept a number of the rookie awards.

“We won five and I was so happy, I was like, ‘What?’” said Alyazia Khaled, an 11-year-old Emirati from Liwa International School for Girls, which debuted three teams this year.

Deb Hughes, vice principal at Liwa International School, said she was proud of her pupils.

“This is our opening year and these amazing girls have worked exceptionally hard,” said Ms Hughes.

“They put their heart and soul into it. The girls were thrilled about being able to come up with their own design.

“Can you imagine being 10 and seeing your own drawing come to life? All that they learned through the technology was just amazing.”

“There is a range of skills that children will gain,” said Ms Mahmood. “Presentation skills, working together as a team, problem solving, having to critically think to come up to solutions to the problems, to make the car go faster.

“They have to go out and gain sponsorship for these things, so it’s about being aware of how to approach different institutions for funding. So there is a range of different skills that they gain and certainly working together as a team and working on a project is something that certainly will support them in the future.”

Abu Dhabi students will nurture another world in school’s biodome