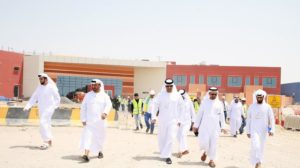 The new public schools will have the combined capacity of nearly 9,000 places for pupils from kindergarten to grade five.

In the capital, one school will open in Mohammed bin Zayed City with 60 classrooms to accommodate 1,500 pupils from grades one to five and another 12 kindergarten rooms for up to 240 children. The building also contains administration areas, dining halls, multi-purpose rooms, a library, laboratories, music rooms and a clinic that meets Abu Dhabi Health Authority standards.

The second new school in the capital is in Shakhbout City and will be capable of enrolling up to 1,250 students in 50 classrooms from grades one to five, and 240 kindergarten children in 12 classrooms. All the new school buildings are equipped with high-end furniture and advanced educational resources that suit the different age levels and abilities of students, according to Adec.

In Al Ain, the schools of Al Yahar, Al Shuaiba and Ain Al Fayda will each accommodate 240 kindergarten pupils and 1,250 Cycle 1 students.

In Al Quaa, however, the new school’s capacity is 1,000 students in 40 classrooms covering grades one to five and 12 classrooms for up to 240 kindergarten children, as well as the associated educational buildings and facilities.

The schools, which officials toured on Tuesday, are expected to be handed over to Adec from Abu Dhabi General Services Company (Musanada) by early August.

When launched in 2008, the Future Schools Project set a goal of building 100 new public schools across Abu Dhabi, Al Ain and the Western Region by 2020. To date, there have been 59 schools – including the six announced on Tuesday – constructed under the Future Schools initiative, according to Adec.

Suwaidan Al Dhaheri, the acting ​​Musanada chief executive, said the company has been keen to deliver school-building projects within the planned schedule and according to the highest international standards.

“This emphasises our keenness to realise Abu Dhabi Government’s vision and strategic plans,” he said.

“Musanada delivers facilities that will provide an advanced educational environment, to unlock students’ potential and abilities, and invest in them being the future generations and the key element for sustaining development and progress across the UAE.”