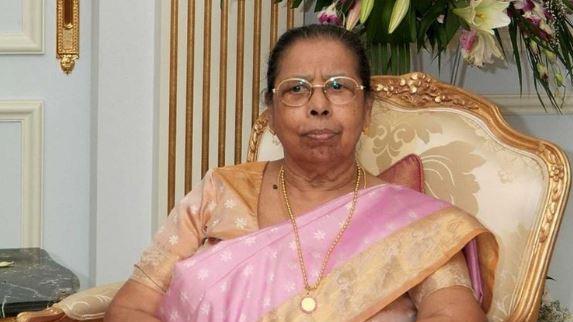 Sheikh Mohammed bin Rashid, Vice President and Ruler of Dubai, paid tribute to Mariamma Varkey who died this week at the age of 89.

Ms Varkey was a leading figure in UAE education and the mother of Gems Education founder and chairman Sunny Varkey.

She first arrived in Dubai in 1959, as a teacher, then set up the institution that became the foundation of Gems.

“Mariamma Varkey moved to Dubai with her husband in 1959,” Sheikh Mohammed tweeted.

“Driven by an enduring passion for education, she started tens of schools with thousands of students inside and outside [the] UAE.

“Mariamma recently passed away, leaving behind a legacy of education in [the] UAE and beyond.”

On Wednesday, Gems Education confirmed that Ms Varkey had passed away.

Many residents in the Emirates took to social media to pay tribute to Ms Varkey and offer condolences to her family.

“Madam Varkey will first and foremost be remembered as a beloved mother and grandmother, but also as a teacher and pioneer in education, whose impact transcends generations,” said a representative for Gems Education.

“Her humanitarian contributions focused on the learning development of girls and the advancement and recognition of teachers, with her legacy rooted in her unrelenting belief in the power of quality education to better society.”

“I am most grateful for these kind words from His Highness Sheikh Mohammed bin Rashid Al Maktoum, Vice President and Prime Minister of the UAE and Ruler of Dubai, commemorating my beloved mother and her pioneering role in furthering education in the United Arab Emirates.

“My family and I consider it a most gracious tribute in honour of her.”

Mr Varkey said his mother loved the UAE, its leaders and people, and considered it her home and second country.

“We will continue and live up to her pioneering legacy and embody her firm belief in the power of education to change the lives of generations and make the world a better place,” he said.

In 2016, Gems established the annual Mariamma Varkey Award for Inspirational and Outstanding Teaching to raise the status of the teaching profession and to recognise the best teachers working in Gems schools.