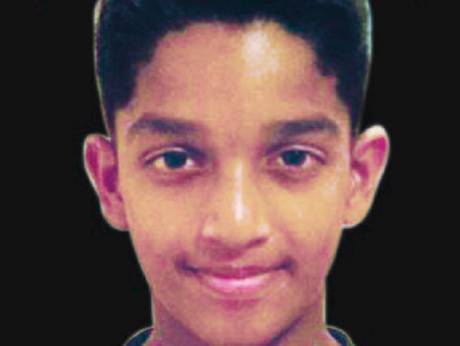 Sharjah: The school community of a boy who was fatally run over in Sharjah on Monday is in shock, urging children to stay safe when playing outdoors.

George Mathew, 13, died after a speeding vehicle hit him in Al Buhairah area on Monday night, after school hours. The Indian teenager, while playing with friends near his home, was fetching a football that had rolled onto the road, Sharjah Police said.

George’s father was too grieved to talk when contacted on Tuesday night. It is understood the family were to fly to India on Wednesday.

Staff from the school visited George’s family to pay their respects. The school community is mourning the loss, while calling for sustained child safety awareness.

On Wednesday, George’s schoolmates and school staff said he is being dearly missed, describing him as a smart, cheerful and social young lad. They said he was the captain of the under-13 school basketball team, a black belt in karate, and affectionately called “Autocorrect” as he was keen to address the right way of doing things, be it studies, sports or anything else.

Following Monday’s incident, activities and counselling has taken place at the school in memory of George, assisting the school community to come to terms with the tragedy, and to reiterate safety messages.

“Yesterday [Tuesday], nobody wanted to play at school because of the sense of loss and shock. George was one of the most disciplined students. He was such an involved boy that his absence will be felt everywhere, in the school bus, on the basketball court and in class,” she said.

Marwaha also called for closer cooperation between all stakeholders in improving child safety.

“The school environment has already been made very safe. While we encourage a lot of play outdoors, we need to make sure there are enough facilities, first of all, and also that children are aware of the rules; [it’s important] to keep on reinforcing safety rules.

“And it would be nice if, in parks, the government would put up safety rules for children once again, so that when you see it all the time, it gets reinforced in your mind.”

She added: “I also want to share that while the school plays an important role in creating awareness, we all need to join hands — whether it’s family, others. It’s important they talk to children about these issues. There are plenty of safety measures in place, but I think everybody needs to take some responsibility.”

Elizabeth Mathew, head of counselling department at the school, said she held a grief counselling session with George’s section.

“We held activities to remember how special and attached George was to us. I had children coming up to me and saying ‘he was more than a friend, he was a brother to me’,” Mathew added.

Keshav Nair, a close friend of George in grade eight, said he last chatted with him on WhatsApp on Monday, hours before his death. “As usual, George was keeping the group chat lively and autocorrecting us,” Nair said.

Vishwam Subramanian, another close friend in grade eight, said George was “very funny and helpful” with peers and teachers alike.

John John, a grade seven pupil in George’s basketball team, said: “George was a fun captain. He was not like the others. He wouldn’t keep the ball to himself, he would get everyone playing as a team.”

Gautam Baiju, another grade seven student who plays in the team, said George was a strategic thinker who would appreciate inputs by others.

Rohan Kapur, the head-boy of the senior wing who is in grade 12, said students will be dedicating a song for George — See You Again by Wiz Khalifa — “as a tribute to such a multitalented boy”.

Neeraj Vijayvasnani, the head-boy of the primary wing who is in grade five, said: “We pray for his soul. I would like to also remind that we should be careful at home and when outdoors.”

Following Monday’s tragedy, Major Abdul Rahman Khatr, director of the traffic awareness branch at Sharjah Police, told Gulf News that parents should keep a watch over their children and not allow them to play in grassy or open areas located near pavements and roads that pose a risk to their safety.

Such places, he said, are for sitting and relaxing, not for playing.

For playing football and other games, there are dedicated areas, added Maj Khatr. Children should play in safe areas that are surrounded by a fence and located far from roads, he said.

In each residential area of Sharjah, there is a public park and children can play in it safely, according to police.

Maj Khatr appealed to all parents to teach their children to observe road safety rules. He also asked motorists to give priority to people crossing roads and urged them to adhere to the traffic laws and speed limits, especially in residential areas.