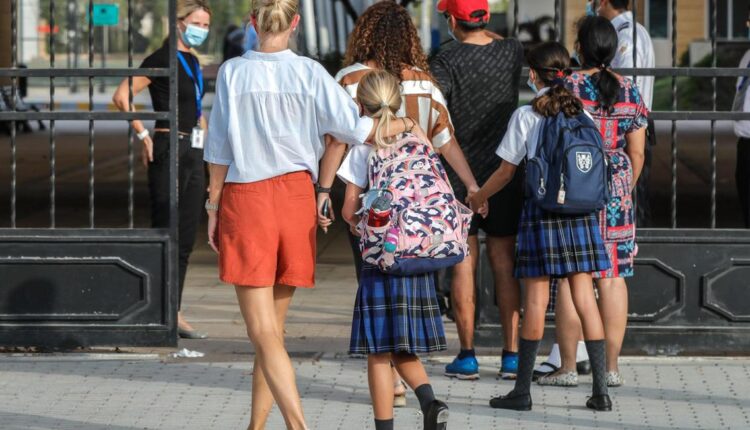 Ramadan 2021: everything you need to know about UAE school hours

Hours vary depending on the emirate, and even in individual schools within them

However, hours vary depending on the emirate and on individual schools within them.

The National explains the rules in Dubai, Abu Dhabi and Sharjah, and why the hours differ.

In Dubai, private schools can hold classes for up to five hours a day, compared to the usual seven.

Schools have been given the flexibility to set when the day should begin and end.

But they have been asked to limit the amount of homework to allow time for prayer.

“Private schools in Dubai can provide a maximum of five hours of instruction during Ramadan,” said Mohammed Darwish, chief executive of permits and compliance at the Knowledge and Human Development Authority.

“We have given schools the flexibility of choosing their start and end time in consultation with their parent community.

“During Ramadan, the whole school community will be spending extra time in prayer with their families,” said Mr Darwish.

“We ask schools to be mindful of this with regards to the amount of homework and assignments set for students.

“Every Ramadan, we practice the virtues of patience, togetherness, compassion and inner strength. This year, we will need to draw on these virtues more than ever.”

Parents said some schools in the emirate have allowed children to arrive 30 minutes early and leave 30 minutes late, while sticking to the five hours’ teaching time, to help accommodate those who are working.

Private schools in Abu Dhabi have also had their hours reduced to a maximum of five.

Each school is expected to “cover the full content of the core subjects during those hours,” said the private schools’ regulator, the Abu Dhabi Department of Education and Knowledge (Adek).

Adek said schools cannot start the day before 9.30am and must close by 3.30pm.

The Sharjah Private Education Authority said schools should not be open for longer than five hours during Ramadan.

Homework should also be reduced during the month, it said.

Classes should start at 9am and be held for between three and four hours.

What parents in Dubai say about school during Ramadan

Laura Stockwell has her two children at Jumeirah English Speaking School in Dubai.

“Our school did a survey asking parents what operating hours they would prefer and the majority went with 9am to 2pm,” she said.

“While this is fine for older pupils, the issue is that younger pupils – who already do a shorter day – are now missing out on an hour by starting at 9am instead of 8am. Some parents feel short-changed.

“I think the issue has arisen because there is no consistency between schools and, generally speaking, parents do not enjoy the fact that they perceive one school to have a better solution to another school.”

Clara Cloche, 41, said some pupils were afforded more lesson time than others due to the differing Ramadan schedules across schools.

Her three children attend two different campuses, with Swiss International Scientific School Dubai open from 8.30am to 1.30pm and North London Collegiate School operating from 8am to 12.40pm during Ramadan.

“I would have appreciated some options to help kids catch up on the missed education and knowledge due to lockdowns and quarantines over the past year,” she said.

“I don’t criticise the reduced hours at all, but the fact that all schools are doing different timings seems strange.

“Why should pupils at some schools get up to two hours less of education than others?”

What parents in Abu Dhabi say about school during Ramadan

The situation is similar in Abu Dhabi, where many schools have chosen to operate between 9.30am and 2.30pm for the allotted five hours.

But parents have said some are only opening for four.

“My sons’ school has announced reduced Ramadan hours for the second year. The in-school hours in previous years were five per day, reduced to four and a half last year, and now to four hours per day this year. The minimum required by Adek,” wrote one member of Abu Dhabi Q&A Facebook page in a post on the topic.

“Can parents please share their school Ramadan hours if they have been announced please?”

The times were most commonly from around 9.30am to 2.30pm, according to those who commented.

But some were operating for four hours between 9.30am and 1.30pm only.

“My sons’ school always had Ramadan in-school instruction of five hours per day. It’s decreasing. I was genuinely interested to find out if other schools are doing the same.”

According to a circular sent to schools in Abu Dhabi, the school day should be four to five hours long, but four hours was preferred.