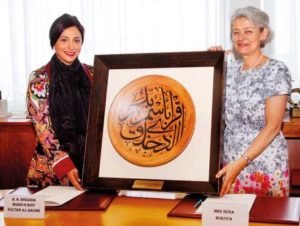 The agreement aims to enhance cooperation in culture, especially in organising events and launching initiatives that celebrate books and contribute to promoting reading during Sharjah’s tenure as World Book Capital 2019.

Sharjah is the first city in the GCC and third in the Arab world and Middle East to have been crowned the title, after Alexandria and Beirut.

Signed at the Unesco headquarters, the agreement has come within two months of Sharjah being recognised as the World Book Capital 2019 — a title given by Unesco each year to one city in the world that plays an instrumental leading role in the field of the knowledge creation, as well as actively promotes books and reading.

Also present during the signing were Hussain Ebrahim Al Hammadi, Minister of Education, and Abdullah Ali Misbah Al Nuaimi, permanent representative of the UAE to Unesco.

Speaking on the occasion, Shaikha Budoor said: “Sharjah’s rich cultural project reflects a four-decade-long journey in which the emirate has grown from strength to strength in the fields of science, literature and the arts. For our efforts, we were honoured with prestigious international recognitions like ‘Arabic Culture Capital’ in 1998, and ‘Islamic Culture Capital’ in 2014. Today, we have added yet another golden title to the emirate’s achievements with the World Book Capital 2019 title.”

She added: “Being named the World Book Capital is a medal we pride ourselves for. We will carry it with us as we continue on the path of building Sharjah as a city that embraces literature, knowledge and culture in almost every language in the world, in collaboration with multiple entities and concerned authorities.”

He also outlined the Ministry of Education’s launch of an array of initiatives designed to foster the love for reading in students.