The addition of more schools in Dubai coupled with the city’s more affordable housing offerings mean parents no longer have to settle for their second or third choice when it comes to choosing the school they want. And if market trends are anything to go by, tuition fees could well decrease soon too. 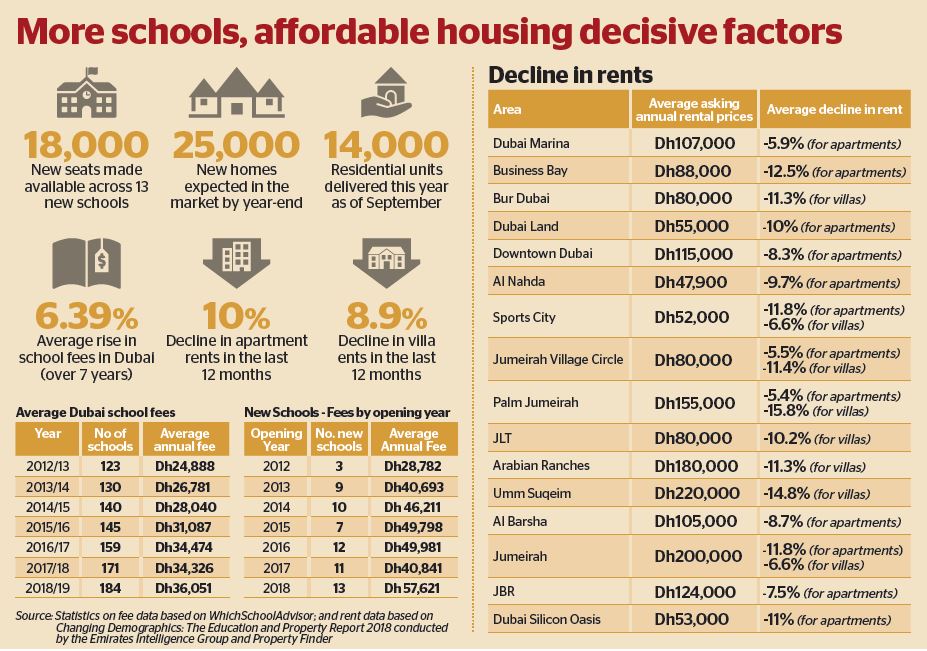 As 18,000 new seats became available across the city’s 13 new schools this year, the addition of 14,000 new residential units has left families with a host of options when it comes to two of their biggest costs; education and housing. And that expansion is set to continue, with 25,000 new homes to be added to the market by the end of 2018, according to a new report released by the Education Intelligence Group (EIG) and Property Finder.

Despite rife competition in the education sector, school tuition fees in Dubai have continued to increase year on year over the past seven years; all while property and rental prices have come down. However, the report notes that school operators need to “move with the changing tide”, by revising their approach to student enrolment and overall fees.

When it comes to new schools that opened in 2018, the average price point for enrolment is Dh57,621. However, with choice and competition the new norm in the education sector, schools are being forced to re-evaluate their position in the market.

With the addition of good quality schools in more affordable residential areas, families in Dubai are now being incentivised to make choices that suit their needs.

And the report states that “investors and operators will need to align their expectations to this ‘new market’ of choice and competition”.

Speaking to Khaleej Times, Shaun Robison, director of EIG, said this shift in education and property landscape could spell good news for parents.

“It should drive (tuition) prices down and I think this will happen over the next 18 months. Parents will get greater choice when it comes to schools, but the biggest benefit is the reduced travel time.”

In a Khaleej Times poll of more than 200 parents, 74 per cent of respondents agreed that the addition of schools and housing complexes in Dubai has given them more choice when it comes to preferred schooling options.

As the city continues to see the development of new residential communities out of central Dubai (namely towards the area of the Expo 2020 site along Sheikh Mohammed Bin Zayed and Emirates Road), price reductions in real estate has created a buyer’s market, and the same trends are expected to start taking shape when it comes to schooling.


If the approach does change, a compromise of quality will not be accepted by parents who are demonstrably more discerning than before.

That changing demographic, and the noticeable shift of development in both, schools and properties, means that parents are now more empowered to make choices that are in their interest, rather than being stuck with options that are less than desirable.