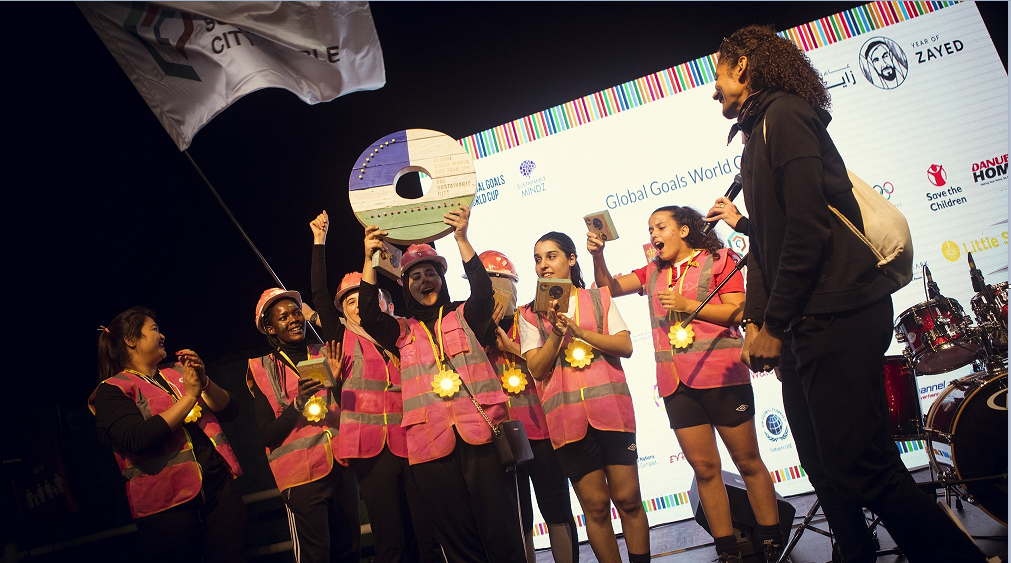 The soccer tournament for women organized by women, is aligned with the sustainability theme of the Year of Zayed

Diamond Divas, the winning team, secured a spot in the global final to be held in New York City in September 2018, held during the UN General Assembly Week.

The GGWCup UAE is aligned with the sustainability theme of the Year of Zayed to be part of the events and initiatives in the UAE and abroad to commemorate the memory of the late Sheikh Zayed bin Sultan Al Nahyan.

The GGWCup UAE is organised by Dubai-headquartered Sustainable Mindz and Denmark-based Eir Soccer, under the patronage of the Royal Danish Embassy Abu Dhabi, Save the Children International and the United Nations Development Programme.

Bollywood actor and GGWCup ambassador John Abraham attended the two-day tournament, which ran daily between 4 pm and 9 pm with the participation of national and expatriate women from across the UAE. Women of all ages played in the tournament by setting a team of 5 to 8 female players and choosing one of the 17 goals to advocate for. The winning team Diamond Divas of Diamond Developers secured a spot in the global final to be held in New York City in September 2018, held during the UN General Assembly Week.

The organisers said that the tournament was organized to drive awareness on implementing the UN’s Sustainable Development Goals and empowering young girls and women around the world to become agents of change one goal at a time. The spectator friendly, five-a-side football tournament for passionate women and girls assembled 24 teams to experience the sheer joy of playing soccer and the meaningfulness of taking a stand for the world they want.

The GGWCup has also created SDG5 dream team of 6 women to celebrate women super heroes to inspire and serve as the role models of their generation. The dream performed to share their achievements and efforts towards breaking the mould and standing strongly for what they believed in. The dream team included Raha Moharrak, the youngest Arab and the first Saudi woman to conquer Mount Everest and Houriya Al Tahri, the first female Emirati football coach for the National Women’s team and 13-years old Gulmehek Khan, the youngest published poetess in the world with her first collection of 30 poems published when she was 11 years old. This team played for SDG 5 (Gender Equality).

Commenting on the tournament, Helle Thorning Schmidt, CEO of Save the Children International and Former Prime Minister of Denmark, said, “We are proud to be part of the Global Goals World Cup. We’ve hosted football tournaments in Nairobi, Copenhagen, New York, and now Dubai. Girls play for the UN Global Goal they are most passionate about to raise awareness of the Sustainable Development Goals.”

Ms. Noora Mohammed, Founding Partner of Sustainable Mindz, said, “We are proud that the GGWCup has been honored to be part of the events and initiatives in the UAE and abroad designed to commemorate the memory of the late Sheikh Zayed bin Sultan Al Nahyan, the Founding Father of the UAE who was an avid believer that sport improves lives, empowers women and breaks down barriers between people and nations. The GGWCup UAE will be part of initiatives to showcase Sheikh Zayed’s impact and legacy and promote the values that he displayed throughout his life in creative and interactive ways.”

Mr. Karim El-Jisr, Executive Director of SEE NEXUS Institute at The Sustainable City, Dubai, said, “The Sustainable City is proud to host the first Global Goals World Cup in the UAE with Sustainable Mindz to advocate the role of women in promoting the UN’s Sustainable Development Goals. The City embraces social, environmental and economic sustainability and demonstrates low carbon living and healthy lifestyle.”

Mr. L T Pagarani, Chairman of Choithrams, said, “We are glad to be part of the great initiative as part of our efforts to give back to the society. Hunger has always been on our list of concerns for the past few years. We have partnered with various organizations such as World Food Program and MasterCard to address this Global Problem. We, at Choithrams, continue to do our part by joining hands with Sustainable Mindz and Global Goals Cup this year to further help fight hunger.”

Mr. Harmeek Singh, Founder and CEO of Plan B Group, said, “We are proud and honored to take part in the GGWCup, an event that is aligned with our continued efforts to raise awareness and propel the conversation on women empowerment. Our #WomenOfSubstance campaign for the Dubai Women’s Run is a testament to that commitment, one that advocates our stance for gender equality and more importantly celebrates the achievements, accomplishments and contributions of women in the region.”

The UN Sustainability Goals give a clear direction towards what must be achieved to ensure a better future. By empowering each other, women can shape and achieve this future. The GGWCup is part of celebrating the growing commitment in the region to sustainable development and gender equality, and giving local companies and organizations a great opportunity to join our global community in showing their support for the SDG’s.

The GGWCup has become a ground-breaking prototype of how to unite multiple stakeholders around a shared desire to engage their local community in realizing the UN Global Goals. The events draw high-level support, and engages local and international stars as referees, commentators and ambassadors. The tournament used the power of sport to unite and inspire individuals all over the world to take positive actions. The football matches are played by a different set of rules, awarding points for both scoring goals as well as working for the 17 Global Goals for Sustainable Development.

The strategic partners for the GGWCup in UAE include The Sustainable City- Dubai, the UAE Football Association, Dubai Corporation for Ambulance Service, Choithram & Sons, Liquid of Life and Plan B. The corporate partners also include Chalhoub, Danfoss, Dragon Oil and Al Serkal, to name a few.

The GGWCup began in Copenhagen in 2016, as a tribute to the power of sport to change the world. The GGWCup tournaments raise awareness of the most pressing challenges across the different continents while showcasing the power of regular people to take action and address the issues. The football matches are played by a different set of rules, awarding points for both scoring goals as well as working for the 17 Global Goals for Sustainable Development. In order for teams to qualify, they must choose one of the Global Goals to play, advocate and mobilize for.

In 2015, UN Member States endorsed the 17 Sustainable Development Goals (SDGs), expected to guide the development agenda through 2030. The SDGs are aligned with the Government of the UAE development agenda of vision 2030 and its commitment that no one gets left behind. Please follow us on Facebook.com/ggwcup for updates, profiles on the teams playing, VIP participants and other media stories. Go to www.ggwcup.com for more information.

Sustainable Mindz is specialty Corporate Sustainability and Responsibility Consulting firm that provides highly specialized services that address specific problems or aspects of a client’s needs. Together with its partners and stakeholders it is committed to harnessing the powerful opportunity to advance and promote the UN Sustainable Development Goals through programs designed to be impactful. Sustainable Mindz believes that the conventional way of enabling companies to become more sustainable, socially and environmentally responsible is not enough to creating change, and realizes that to have a more positive measurable business value “identifying and addressing social and environmental challenges on an industry level is the answer”.

The vision behind Sustainable Mindz is to be a center of excellence to create a unique platform that will allow a better world by helping others to impact theirs. We lead our clients there through innovation, knowledge sharing and ideas that build programs and people to create positive social and environmental narratives at an industry level.

Eir Soccer has 10+ years of experience with creating unique, large scale sports events. Eir Soccer is a recognized first mover and pioneer of promoting diversity and inclusion in sport. Winner of the IOC Women in Sport Trophy 2016, we have a long-standing track record of designing engaging events that connect the best of multiple worlds to create change both in attitudes and behavior.

Eir Soccer is also the sole manufacturer of the only soccer ball scientifically designed for women, and the first organization to act upon the mounting evidence of the harmful effects on women caused by playing with the standard size ball. In this case: One size does not fit all, and Eir believes that women are entitled to have high quality sports equipment that fits them perfectly.