Dubai:  Alpen Capital announced the publication of its GCC Education Industry report. The report provides an outlook of the GCC Education industry until 2020 covering pre-primary, primary, secondary, tertiary and vocational segments across all GCC nations. It also showcases the current state of the education industry across the GCC nations while presenting the recent trends, growth drivers, challenges. In addition, it profiles some of the prominent education providers in the region.

“The GCC education sector is witnessing a robust growth in student enrolments coupled with a steady expansion in related infrastructure. Population growth and rise in disposable income have supported the growth of the private education sector. Further , Government measures to encourage private sector investments alongside an increasing preference for international curricula among residents are also attracting renowned foreign education institutes to the region”, says Sameena Ahmad, Managing Director.

“The Education sector in the region is growing at a rapid pace and offers attractive opportunities for private investors. The sector has witnessed several M&A transactions in the last three years owing to the increasing demand for quality education. The investor friendly policies adopted by the GCC governments are also helping the trend towards increased private sector participation. We believe that the existing momentum in the M&A space of the education sector in the region is likely to continue fueled by factors such as favourable demographics, high disposable income and growing awareness for quality education”, says Mahboob Murshed, Managing Director. 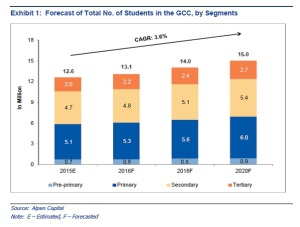 According to Alpen Capital, the total number of students in the GCC education sector is projected to reach 15.0 million in 2020, registering a CAGR of 3.6% from an estimated 12.6 million in 2015. An expanding base of school and college age population and increase in the Gross Enrollment Ratio (GER) across the education segments are likely to drive the growth.

The number of students at private schools is projected to grow at a 5.1% CAGR from 2015. Enrolments at public schools are anticipated to increase at an annual average of 2.6%.

Saudi Arabia will continue to dominate the education market in the GCC by 2020. From an estimated 9.2 million in 2015, the total number of students in Saudi Arabia is projected to grow at an annualized rate of 3.5% to 11.0 million in 2020. In terms of annualized growth during 2015 to 2020, the number of students in Oman, Qatar, and the UAE are projected to grow faster than the other member nations.

The GCC population is projected to reach close to 60 million in 2020, of which, the number of people below 25 years of age is likely to surpass 22 million. A large and increasing base of school and college going population is fostering the demand for education in the region. Further, a diversified expatriate community is increasing the demand for international curricula, thus attracting several international schools and colleges to the region.

A high personal income level alongside a tax-free environment has resulted in additional disposable income among the GCC population. Consequently, the population displays a strong ability and willingness to spend on quality education at international schools, translating into a huge opportunity for the private players.

Focus on the education sector across the GCC nations has been increasing, in terms of budget allocations and long-term development strategies or five-year plans. This is not only strengthening the local education system but also presenting opportunities for international schools and universities.

There is a growing demand for private education in the GCC region. The private sector is receiving support from the governments through the investor-friendly policies aimed at augmenting the scale and quality of education in the region. The share of private schools in overall K-12 enrolments increased from 19.0% in 2009 to 22.1% in 2014. The growth is likely to continue as the countries focus more on privatization.

The GCC governments’ investments coupled with private sector participation have resulted in a spate of projects in the region’s education sector. More than 500 educational projects collectively worth above US$ 50 billion are under various stages of development across the member nations. With several noteworthy projects underway, the GCC education is set to witness significant capacity addition.

The shortage of teachers in the region is the second highest in the world due to an overall dearth of teachers globally coupled with a low pool of nationals inclined towards pursuing teaching as a profession in the GCC. Although measures are being taken to address the shortfall, there has been an increase in the poaching of skilled teachers from competitors by offering higher incentives. Profitability of the education providers is under pressure due to an ensuing rise in salaries, which are a major component of the operating cost. Moreover, the dependence on expatriates, who are transient in nature, is further challenging the availability. The teacher turnover rate in the region is high, marked by a short tenure of about two years at an institution. The opening of new institutions in the region is likely to worsen the situation.

Private education providers who have established presence across the GCC nations in the last decade face operational challenges. In the current global investment climate, it is challenging to receive sufficient funding for projects. Although banks actively provide loans to players in the education sector, they are limited to entities with a credible track record.

As several new schools are opening up and under development in the region, competition among the private players is increasing. This is also leading to an oversupply in the education market especially in Dubai thereby intensifying competition and impacting profitability of newer players.

A government-imposed restriction or limitation on the fee hike is another challenge faced by the private players. With no or little increase in fees, which is not proportional to the rise in costs, private schools are unable to spend on upgrading their infrastructure and resources, deploying technology, and recruiting skilled teachers. Other operational challenges include long gestation period, inflation, and difficulty in hiring skilled teachers, among others.

Rather than enrolling at institutes within the region, students in the GCC prefer to pursue education abroad, either through self-funding or with external support. The desire to gain global competencies and build foreign language skills is driving outbound mobility. Another factor driving the outflow of students is the rising cost of education in the GCC.

The GCC education system is yet to align itself with the needs of the globalized industry and become competitive in the fields of science and research. Because of the skill gap, the member nations face a high rate of unemployment among the youth, with the rate in Saudi Arabia as high as about 30%. To fill the gap and foster a knowledge-based economy, the GCC nations are taking constructive steps towards revamping the education system by placing more emphasis on technical and skill-based learning. However, overall enhancement of skills of the region’s students is likely to happen only over time.

Rising preference for International schools: The popularity of international schools in the GCC is rising due to the presence of a large number of expatriates coupled with the desire of the local residents to send their children to institutions offering high-quality education. The rise of disposable income in the region and the willingness of the population to spend on high quality education have led to the establishment of several international educational institutes in the GCC. Based on the number of foreign schools, the UAE ranked the highest among the top fifteen countries globally with its 511 schools and Saudi
Arabia (245) and Qatar (152) also featured in the 5th and 14th positions, respectively.

Growing demand for technology driven education: The GCC nations are increasingly deploying information and communications technology to facilitate effective learning. In the last decade, several schools and universities in the GCC have undergone a transformation phase for adopting, installing, and upgrading the information technology infrastructure. The governments are investing heavily towards modernizing the education system. The gradual spread of technology across the education institutions is likely to prepare the students for a future in an increasingly technology-oriented job market. Moreover, the use of internet and devices such as laptops and tablets is facilitating a more enjoyable and effective learning atmosphere, which is likely to result in improved grades of the students.

Increasing importance of higher education: Having identified the gap between the skills of the available workforce and those demanded by the labor market, the GCC governments are putting in efforts to enhance the higher education landscape. Countries such as the UAE and Qatar have been developing their higher education ecosystem with the establishment of international colleges and universities to attract overseas students. There is also an increased awareness about the importance of tertiary education among the region’s citizens, who face challenges in the labor market.

Emerging Education hubs in the Middle East: The UAE and Qatar are the emerging as the hubs for higher education, with the presence of prominent international universities and educational institutions. Dubai has become a major education destination as it accommodates several overseas students, a large number of which are from the Arab region. The city’s state-of-the-art infrastructure, easy visa policies, favorable investment climate, and strategic location have drawn reputed foreign education providers. Students are also drawn to the country due to hassle-free visa availability and presence of reputed international colleges and universities.