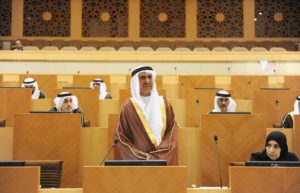 ABU DHABI, 14th June, 2017 (WAM) — The Federal National Council, FNC, during its 19th meeting of its 2nd ordinary session of the 16th legislative chapter, held on Tuesday evening at its headquarters in Abu Dhabi, and headed by Dr. Amal Abdullah Al Qubaisi, Speaker of FNC, decided to reconsider the financial rewards for teachers, work on introducing greater financial and moral incentives appropriate for the work of teachers.

They also decided to create a system for gradual career advancement in the teaching profession with clear stages of promotions, and look into granting female teachers voluntary early retirement, especially mothers with children under the ages of 10.

The FNC adopted several recommendations during its discussion on the Ministry of Education’s policy with government representatives. It demanded a review of the mechanisms and plans of the Ministry to attract national manpower and increase the percentage of Emiratisation, especially among males and on the early retirement of the female teachers.

While answering members’ questions, Hussain bin Ibrahim Al Hammadi, Minister of Education, highlighted a series of challenges the ministry is facing and is striving to transform into opportunities, to realise UAE Vision 2021, with the aim of achieving the goals of the national agenda for education and attain a standard of education that will transform society into a community and economy of knowledge.

“This will demand a fundamental transformation of teachers, from those who transfer knowledge to facilitators, as the world is witnessing a major shift in work environments. Therefore, the required skills demanded from students have changed and should be developed to be in line with the work market, while the goals of the national strategy for education should be achieved,” he added.

Al Hammadi further added that school curriculums have changed in their design and content, especially at the start of the 21st century, for predicting a future built on knowledge and innovation. “Therefore, graduates are needed who have the ability to compete in the ever-changing work environments, as today’s graduates are my brothers and sisters and tomorrow’s graduates as well. The Emirati student must have the ability to adapt to these rapid demands, which require modern curriculums that are vital and employ the skills that will enable students to understand, create, think and lead. They must also merge both knowledge and sciences, and provide students with wide knowledge that will enable them to build a work environment with multiple tasks and languages,” Al Hammadi stated.

He said that the ministry will change the curriculum for stage one, with the goal of moving to a modern curriculum out of the necessity to develop the country, which is in line with the country’s plans that aim to prepare students while focussing on the sciences, Islamic and social education and the Arabic Language, as well as the creation of new subjects that will prepare students to deal with the future.

Modernisation requires trained qualified teachers for this qualitative leap and available technical support while not occupying them with administrative matters. The first centre to train and prepare the teachers was launched by the ministry, he added.

Al Hammadi added that it is not possible to continue the policies that do not keep pace with the current age and waste the country’s money. He demonstrated the ministry’s strategic plan, which aims to implement a new vision for an innovative education system, based on the country’s vision to transform itself into a knowledge and innovation-based economy.

He added that an educational system that will enable the nation’s sons and daughters to deal with the demands of the future should be in place. The minister also stressed that the ministry is focussing on developing a curriculum and a new practical plan, adding that this improvement will require a new thinking while focussing on the role of schools and students in this development, and strengthening the national identity.

“In co-operation with national universities, there was a study of the 15 best countries in education, and the support for a child’s learning has been included in the ministry. There is an important national project, which is a plan by the leaders to care for gifted Grade 6 students, placing them in the gifted students’ class as the scientists and researchers of the future. There are also technical schools and an adult education system, while continuous vocational education was created to help students complete high school in their career specialty, for those who have not yet received a high school diploma,” he stated.

He also noted that there has been a focus on the personality of students, the knowledge and skills to review the qualities of the Emirati school, while new subjects have been created, notably in business management, design, technology, programming and logical thinking. He clarified that the students must learn innovative thinking while all countries of the world are merging these subjects in their early stages, and they are necessary for the modern age. The subject of moral education, which has begun to be applied in several schools, starting in the upcoming school year, will be standardised in all other schools, he added.

The minister clarified that there is a need to adopt electronic exams instead of paper exams while a new national exam, which will keep pace with the development witnessed by the country, is being developed. “We have 17 different educational systems, demonstrating the exam system in different classes and their goals. This service is provided by the Ministry to all students,” he added.

UAE passport ranked most powerful in region, 22nd at global level during 2017