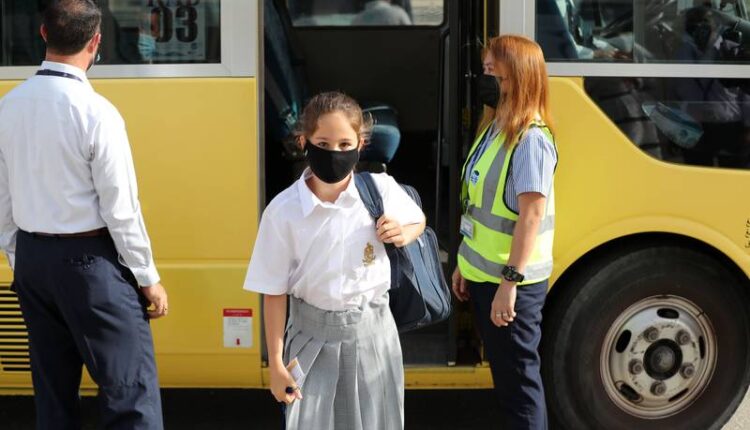 Some Covid-19 restrictions will be lifted and a shorter week but longer days will await pupils as 2022 ushers in a new academic term.

From Monday, January 3, all pupils across the Emirates are due to return to classrooms for the first time since the start of the Covid-19 outbreak.

School galas, sports sessions and after-school activities and art classes will resume at many schools as part of a steady recovery from the worst of the pandemic.

Here, The National takes a closer look at the biggest changes for pupils, parents and teachers when lessons resume following the winter break.

The biggest task for schools at present is to reschedule their timetables and breaks to fit within a four-and-a-half day week, said heads of schools.

Public and private schools will adopt the UAE’s new four-and-a-half day week, which will start on a Monday and finish with a half day on Friday, from the start of the new term.

Rob Commons, principal at Uptown International School in Dubai, said some schools were going to have to rewrite their entire timetable.

“We have taken a very simple approach. Our school day at the moment has six one-hour lessons and we’re shortening our lessons on a Friday to six 40-minute periods instead, which allows us to finish at noon,” said Mr Commons.

“The pupils get the same number of lessons, they just get 20 minutes’ less input from the teacher in some of their subjects once per week.”

The school will also use a flipped learning model and pupils will be asked to do some reading in advance.

“I’m really in favour of this move. I’ve worked in Brunei where they have been doing this (four-and-a-half day week) for a number of years at international schools, and it’s so much more effective for staff and pupil well-being,” he said.

At American Community School in Abu Dhabi, superintendent Monique Flickinger said they were working to develop a new schedule to align with the new working week.

She said the school had a temporary schedule in place that allowed time to create a more detailed and effective one for the new term.

Longer school days for some pupils

The new-look week may mean longer school days for some pupils.

Some schools in Sharjah have confirmed they will be extending hours to meet curriculum needs.

Private-school pupils in Sharjah will attend school from Monday to Thursday, Sharjah Private Education Authority has said, in line with the emirate’s switch to a four-day week for the public sector.

“There’s no other way out, because six hours of the fifth day will now be adjusted in the four days,” said Ms Marwaha.

“At present, pupils attend school between 7.15am and 1.30pm. But, next term they may have to stay back in school for an extra 90 minutes from Monday to Thursday.”

Distance learning comes to an end across all schools

All public and private school pupils across the UAE will return to schools for in-person classes for the first time since the start of the Covid-19 pandemic.

Dubai was the first emirate in the UAE to put an end to distance learning on October 3.

School buses will also operate at 100 per cent capacity, but operators must ensure staff and pupils on board wear masks and there is proper ventilation.

It is a major step forwards in the UAE’s fight against Covid-19.

Schools will expand after-school programmes and activities for pupils in the new term.

“Options for kids after school were restricted. We have after-school athletics and games for the younger children and art classes,” she said.

“Usually we have a longer waiting list than we have spots available. That’s the case right now. We’re just trying to find additional instructors that can accommodate the demand that we have.”

She said the school was also looking forward to opening its cafeteria in the new term.

“We’re delighted to see sports back in schools again, because that’s really key to not only pupil’s health and well-being but also to their social and emotional learning,” she said.

The school will use external providers to offer sports activities on Sundays, with football, archery and swimming on offer.

Galas, international days and in-person assemblies will be back at schools in the January term.

Ms Flickinger said her school would organise a gala on March 11.

This would be the first time they would be able to host the event since the beginning of the pandemic.

“It will be a celebration of all things ACS, where we take a moment to reflect and honour somebody within the community that has been a supporter of the school. For our parents, it’s a time to get together,” said Ms Flickinger.

Ms Shanahan said in-person assemblies would resume at her school.

Parents would be given advance notice when their child’s class was having an assembly and they could come to school and watch the assembly. This would help parents become a part of their child’s learning.

Annual days – which include celebrations and performances by pupils – will also be making a comeback.

Manju Reji, principal at India International School in Sharjah, said the school was hoping to organise an annual day with a limited number of adults invited and social distancing measures in place.

Uptown International School in Dubai is hoping to hold international days in February or March.

On international days schools celebrate the varied backgrounds and experiences of pupils.