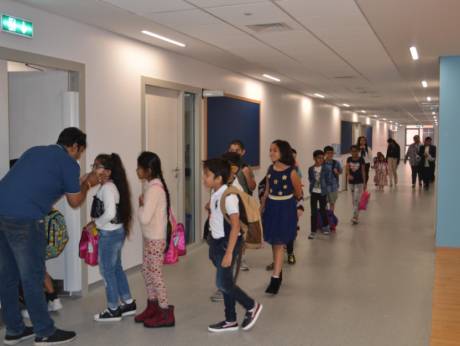 Dubai: Schools reported a smooth day as students marched back to class on Sunday after the two-week spring break in the UAE.

Most schools reopened on Sunday for the third and final term of the academic year, after the second term had ended on March 24.

For Indian schools, some of which reopened last week, it marks the start of the new academic year 2018/19.

The third term will last three months (ending on July 5) before the summer break begins. The next academic year starts in September, but officials are yet to announce the exact reopening dates.

On Sunday, there was heavier than usual traffic as school buses and parents drove students to class. However, no major incidents related to the school run were reported on Sunday.

At schools, some campuses had decorations and balloons welcoming back students.

“We dropped our children to school today not really sure of what to expect. What we witnessed was a campus beyond our expectation. The excitement and happiness was evident on the children’s faces. I think it was a great idea to have children come into school in celebratory fashion,” said Abeer Asad, whose two children — Aiza and Areesha — attend GEMS Heritage Indian School in Dubai.

“The first day back to school is always something to look forward to for our students who are refreshed during the break. A new term means new learning goals and aspirations; and I look forward to another successful year with our students, teachers and parents,” said Michael Guzder, Vice-President, Indian Schools, GEMS Education.

“The first day back from spring break was phenomenal. We welcomed two new families to the school and our returning students. The staff were full of energy and excitement to be able to share their spring break stories. Students were running off the bus this morning to find their teachers, to show all of the pictures and souvenirs from their travels,” Dr Bartlett said.

More needs to be done to help working women in the UAE, say industry watchers