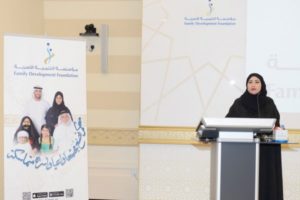 This came during a press conference organised by the Foundation at its headquarters in Al Mashraf today, to announce the launch of the website, with the attendance of Maryam Mohammed Al Rumaithi, Director-General of the Foundation, as well as directors of departments, counsellors, experts and employees of the Foundation.

In her speech, Al Rumaithi said, “Since its launch, the Child Abilities Development Programme,”Early Childhood”, has accomplished many results, whether on the level of training workshops or other related programmes.”

She pointed out that many awareness and training workshops targeting employees wanting to be trained as cultivators of families, parents and children were implemented while clarifying that three specialised training and preparatory workshops for employees of the Family Development Foundation were also implemented, with the participation of its 26 employees.

“Through the continuation of the project’s stages, it pleases us today to launch one of the initiatives of the third stage of the Child Abilities Development Programme, or “Early Childhood”, which is the Self-Education for Family website, to enable parents to benefit from the various educational sources in the field of early childhood that are available through the link on the Family Development Foundation’s website and are updated regularly with information about early childhood, as well an interactive media tool where specialised conversations that matter between family members can be planned and scheduled with early childhood specialists,” Al Rumaithi said.

Al Rumaithi explained that the new website is considered an integrated library with several educational movies that are not longer than two minutes, which are updated regularly in both Arabic and English for the families of children under five, as well as several educational games that enable the family to strengthen the development of their child and are practiced daily at their home.