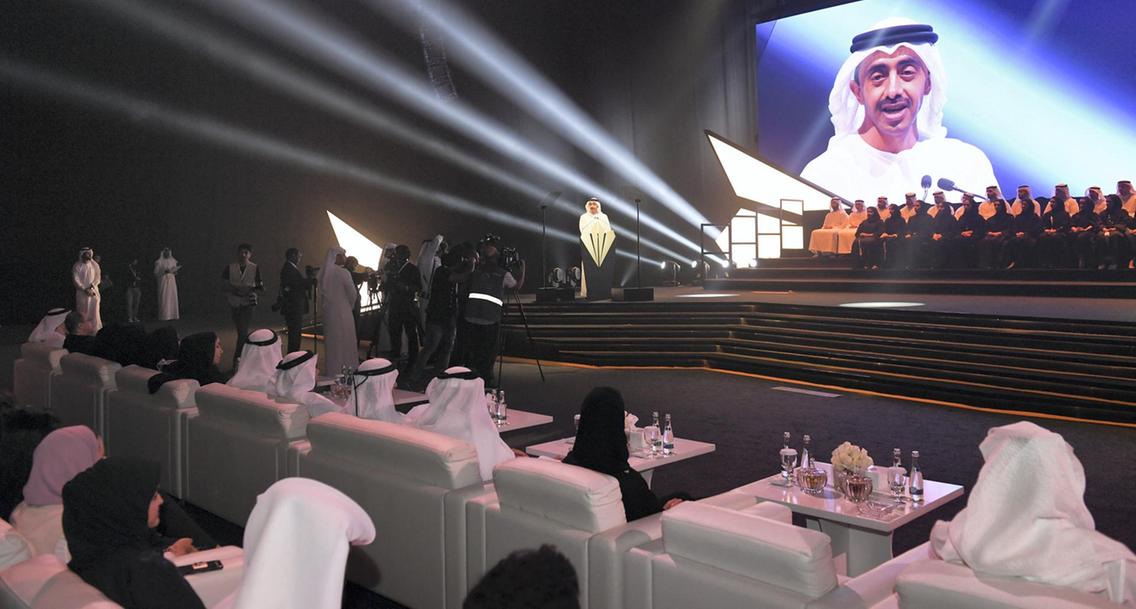 Sheikh Abdullah bin Zayed, Minister of Foreign Affairs and International Co-operation, has issued a rallying cry to UAE students to keep on learning – or risk letting themselves and “their country” down.

In an impassioned speech in Abu Dhabi he urged graduates not to adopt a “third-world” mentality but rather be part of a brighter future for a modern, developing nation.

Speaking at the Exchange Students Forum 2018, hosted by the Ministry of Education at Abu Dhabi National Exhibition Centre, he said the UAE had already made great strides in its commitment to education.

But he added that learning remained the single most important tool for the country’s continuing development on the global stage.

Sheikh Abdullah said: “I want you all to note one crucial point: you have graduated from university. But you have many lessons to learn from life, for life itself has much to teach.

“Wherever you end up working, know that learning is the greatest skill one can master in the 21st century. I call it the learning instinct because in this day and age, a person who does not keep learning around the clock does not belong to this era.

“You can go through life without a degree, but you cannot do so without learning. My dear sisters and brothers, we live in an era when one who fails to learn at least one skill per year is failing oneself and failing one’s country.

“All our country wants is for you to stand out, in life, to learn, develop and compete with your counterparts from around the world.

“You do not belong to the third world, as some people may think. Today, you live in a modern and developed country that will reach planet Mars in three years.”

Sheikh Abdullah said it was every individual’s duty to keep on improving their mental faculties every day – for the benefit of themselves and their country’s prosperity.

He said: “Do you know why we can reach Mars, with God’s blessings? The generation before you believed that education is the solution to all problems, and it is education that makes great nations and lifts them among others like stars that shine in the universe. This is why education was, and still is, one of our top priorities in the UAE.

Sheikh Abdullah recalled his own university days, when he longed for a release from the pressures of exams and studying, only to realise later on how much they had helped him to prepare for future life.

“I recall university days,” he said. “Back then, I would wonder: when will I graduate and be done with these responsibilities?

“Studying, sitting exams, attendance, absences. After I graduated and started working, I realised that those were the most wonderful days of my life.

“I also came to realise that the strenuous efforts fellow students and I had to exert are in no way comparable to the responsibilities and tasks life brought upon us afterwards.”

Addressing more than 200 university graduates in fields such as technology, engineering and medicine, he emphasised that their learning journey had only just begun.

A total of 316 UAE university students are currently studying abroad.

Sheikh Abdullah said the UAE’s Founding Father, Sheikh Zayed, would be “proud” of their determination to broaden their horizons and bring new skills back to their homeland.

“Our late father Sheikh Zayed, may God have mercy on him, used to say: “I want all the children of the Gulf to learn, and I want them to build their own countries themselves, using their knowledge.

“This is why we send our students to all parts of the world, to learn. Upon their return to their country, I would have accomplished my dearest wish and hope, to elevate the stature of the Gulf and its land.

“I am certain that if he were to see you, he would be extremely proud. To the new students among you who are about to set off on a journey to complete their studies; enjoy every day because you are about to experience the most beautiful days of your life, and the greatest diversity life has to offer.

“You will succeed and you may fail, you may rejoice or feel sad, and everything you encounter throughout these years will be a lesson other than those you will learn at university.

“Often we learn from such lessons more than we would from books.”

Dr Ahmad bin Abdullah Humaid Belhoul Al Falasi, Minister of State for Higher Education and Advanced Skills, said: “Our students who are studying abroad, along with those studying inside the UAE, are the country’s wealth for the future.

“They have an active role in building bridges of constructive co-operation between the UAE and the world, thus contributing to representing the UAE and the region in the best way. Our students are the main engine of development in the country.”