The quality of education in Dubai has doubled this past decade, a new report by the Knowledge and Human Development Authority (KHDA) has revealed.

The number of Emirati students attending good or better schools has also grown significantly, with a current rate of 62 per cent: up from 26 per cent in 2008-09.

“This is a particularly special year for education in Dubai, as we are marking 10 years of school inspections. Ten years ago, parents in Dubai had no objective means of knowing about the quality of education schools were providing here, nor any evidence-based way to compare schools to help them choose the best one for their children,” Dr Abdulla Al Karam, KHDA’s chairman and director-general said.

“Now, parents and educators have a common language to talk about education quality, and annual inspection reports on every private school in Dubai provide an invaluable resource for parents.”

Dr Karam said the report will also help look ahead to the next 10 years and that the KHDA will continue working with school leaders, teachers, parents and students. The KHDA will support them to ensure that the children are prepared for “the tests of life and not just a life of tests”.

The KHDA launched its school inspection scheme in 2008, inspecting 108 schools in the 2008-09 academic year. This academic year (2017-18), a total of 166 schools have been inspected. Currently, there are a total of 194 private schools across Dubai, offering 17 different curriculums – French, Japanese, British, American, Indian, Pakistani, Filipino and Russian, are a few of these.

“Reflecting on the last 10 years of school inspections in Dubai, we can clearly say that the quality of education offered by private schools has significantly improved, as have student outcomes and achievements,” Fatma Belrehif, executive director of the Dubai School Inspection Bureau at the KHDA, said. 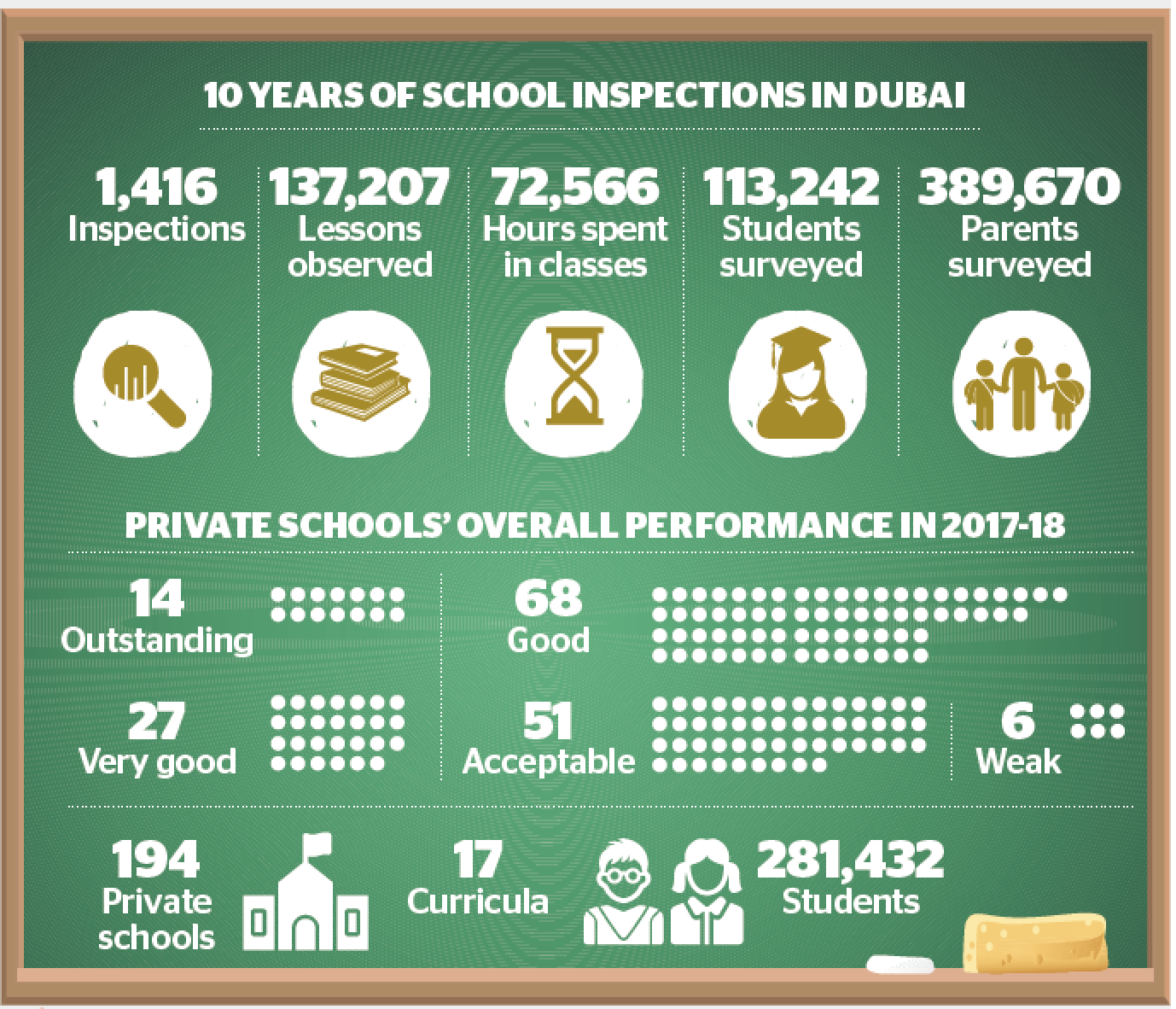 “In the past 10 years, we have witnessed dramatic changes in the educational landscape in Dubai. Parents are now much more likely to enrol their children in a ‘good’ school, compared to before the introduction of school inspections. A major focus of the past decade has been raising the quality of learning experiences and enhancing students’ overall achievements and wellbeing.” The report also highlighted how schools are becoming more inclusive, even encompassing students of determination.

Arabic is not a Priority for Young People in Dubai, say Educators