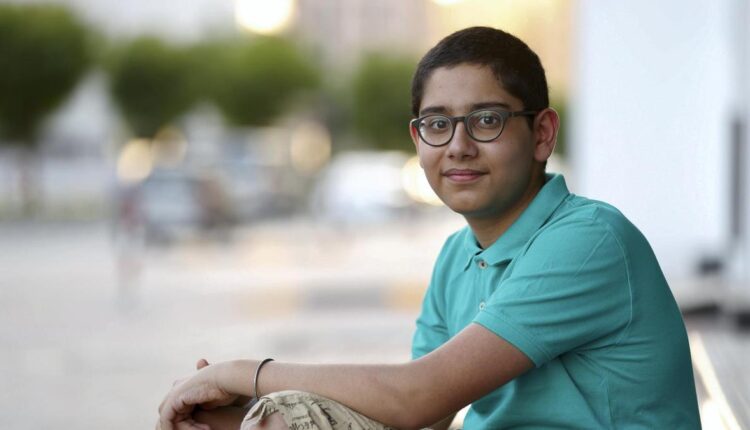 Amritesh Banerjee, 12, felt a new approach was needed to help young people to tackle the subject

A Dubai computer programming prodigy has set out to decode the subject for his fellow pupils after turning author at the age of 12.

Amritesh Banerjee, an eighth grader at Cambridge International School, felt children were being discouraged from embracing coding by the way it was being taught.

He decided to take matters into his own hands and used his spare time after online lessons during the Covid-19 pandemic to pen a child-friendly text on Python, a popular programming language.

His book, Introduction to Python, is aimed at helping children aged between eight and 14 learn the language, and is now on sale at Amazon.

“We need easier books. The reason most children do not code is because of the way it is taught. It’s very confusing. You have to make it fun,” said Amritesh, who is from India.

“I wrote this book after I had finished reading a book on programming and was utterly confused because of the difficult language the writer had used.

“I decided to write a book that could be understood by students who were my age.

“There are a few applications which allow one to programme and create their own games but there should be more resources which can get children interested in programming.”

The science buff started coding when he was 10-years-old and can code in six programming languages.

At an age when most of his friends spend time playing video games, Amritesh started learning programming languages and developing his own games and chatbots.

The reason most children do not code is because of the way it is taught. It’s very confusing. You have to make it fun.

He has earned certificates from the University of Michigan, Duke University and IBM in Python programming, data structures and, data science among others.

Mentored by his father and his teachers, Amritesh, started coding in Python last year.

“I started coding when I was 10-years-old and this helped me make a few games,” said Amritesh.

“I love reading biographies and books on science but I never imagined I would write a book.

“I wanted to share my knowledge as books on this subject are too technical and jargon heavy.”

The pupil enjoys playing cricket and football, and listening to Hip-hop music, when not reading up on science and mathematics books.

“Maths and science help me understand what the world around me is about,” he said.

“When I grow up I want to work as a data scientist or a professor.”

The pupil has already started planning his next project, an advanced book on programming aimed at children aged between 12 and 17.

His book is available in paperback and on Kindle and retails at $35.

Coding is key to UAE’s vision for the future

Sheikh Mohammed bin Rashid, Vice President and Ruler of Dubai, has heralded coding as the “language of the future” and feels it will play a significant role in the UAE’s development.

In 2017, he established One Million Arab Coders, an initiative to train one million Arabs in the key skill of computer programming over a three-year period.

Mohammed Al Gergawi, Minister of Cabinet Affairs and the Future, said the scheme would boost businesses and help to create jobs.

As part of the nation’s digital drive, Abu Dhabi is to open a coding school next February.

Known as “42 Abu Dhabi”, the Mina Zayed facility will be free to attend.

Traditional classes and teachers have been dispensed with and the school will rely on peer reviews, coding projects and internships.

A student who goes through the programme over three to five years is expected to emerge a coder.

The school will be open twenty-four hours a day and has been endorsed by Twitter founder Jack Dorsey and Snapchat’s Evan Spiegel.

What are green jobs – and why are they important?