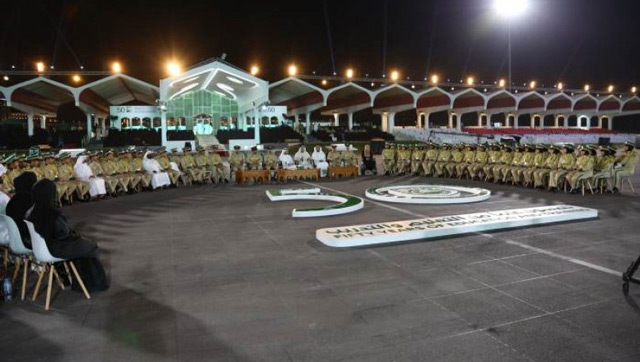 The discussion, which was moderated by Marwan al Hal, highlighted the Dubai Police’s successful education and training process, as well as the significant role played by the academy.

During the discussion, Brigadier Al Suwaidi said the educational process began in 1968, following the appointment of the Vice President, Prime Minister and Ruler of Dubai, His Highness Sheikh Mohammed bin Rashid Al Maktoum, as youngest Chief of the Dubai Police and Public Security, who directed officials to build an independent educational and training agency to facilitate the training of the officers and cadets of the Dubai Police. “The educational process continued until 1987, when His Highness Sheikh Mohammed ordered the establishment of the Dubai Police College, which grants degrees in law enforcement and police sciences,” Al Suwaidi added.

Brigadier Butti spoke about the academy’s latest training courses and programmes, and highlighted its significant academic developments, under the directives of Major General Abdullah Khalifa Al Marri, Commander-in-chief of the Dubai Police.

The panel discussion also featured an open debate with students on the concept of loyalty, which aimed to promote allegiance, belonging and defence of the homeland. The participants then discussed the impact of promoting tolerance and achieving happiness, in response to the announcement that 2019 will be the Year of Tolerance by President His Highness Sheikh Khalifa bin Zayed Al Nahyan.