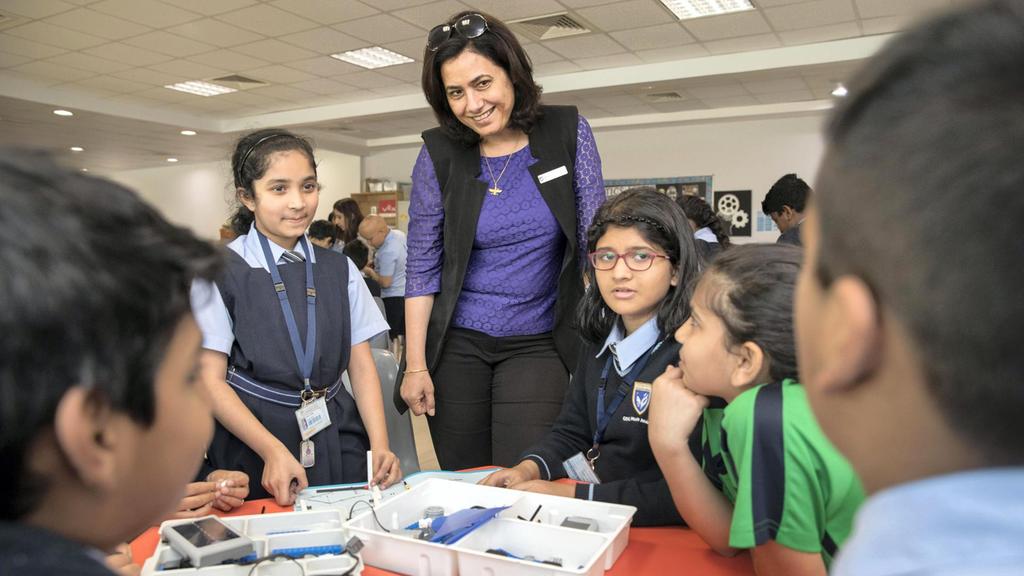 Dubai Indian school rankings out and just one rated outstanding

GEMS Modern Academy has been ranked the best Indian curriculum school in Dubai and the only one to earn the coveted ‘outstanding’ rating in the latest round of inspections.

The 32-year-old K-12 private school, located in Nad Al Sheba, was top among 34 Indian-curriculum schools and has now held the outstanding ranking for seven consecutive years.

Nargish Khambatta, who has been principal since 2014, praised her staff for maintaining high standards.

“Every member of my team stretches themselves to see that the children are really taken care of,” said Ms Khambatta.

“The team is motivated and driven, and I think the culture over the years has been one of excellence.”

Private schools in Dubai are audited by the Government annually to ensure they are making progress toward meeting the education targets set in the National Agenda.

Schools are evaluated on six performance standards ranging from student achievement to the quality of the school leadership and are scored on a six-point scale from very weak to outstanding. The rating helps determine by how much schools may raise their fees and whether they can continue to add new grades or branches.

The results of the Indian and Pakistani school inspections conducted this academic year were released on Wednesday by the Knowledge and Human Development Authority’s Dubai Schools Inspection Bureau.

The DSIB’s report showed that five Indian-curriculum schools were rated ‘very good’, 12 ‘good’, 10 ‘acceptable’ and three were found to be ‘weak’. Three were not inspected as they are within the two-year grace period awarded to all new schools.

Five improved their rank by one position: Ambassador Kindergarten LLC was judged to be very good; Springdales School LLC, The Indian Academy and Credence High School were good; and Bilva Indian School moved up to acceptable.

The Indian High School was the only school to drop its standing, from outstanding to very good.

AMLED School was inspected for the first time, and it was named acceptable.

The emirate’s two Pakistani schools, which educate 2,830 students combined, were rated weak and acceptable, the same as last year.

This academic year, 69 per cent of 78,575 students in Indian schools attended good, very good and outstanding schools, compared to 45 per cent when inspections began in 2009.

“We are continuing to see year-on-year progress by Indian curriculum schools and more students than ever are attending good or better rated schools in Dubai,” said Dr Abdulla Al Karam, director general of the KHDA.

“Indian schools have shown a strong improving trend in TIMSS and PISA assessments and this correlates with the overall inspection findings.”

Indian students showed a marked improvement in the 2015 Programme for International Student Assessment (Pisa), scoring 506 in reading, 511 in science and 509 in maths.

By contrast, the UAE as a whole earned 434 in reading, 437 in science and 427 in maths that same year. The Indian private schools also performed well in 2015 Trends in International Mathematics and Science Study (TIMSS), with students in grade four and eight raising their maths and science skills compared to 2011.

“Their improvement in the performance math, science, reading and other related skills reflects our emphasis on achieving national agenda goals leading to UAE Vision 2021,” said Dr Al Karam. “By improving provisioning for national agenda targets, Indian curriculum schools are directly contributing to the development of a first-rate education system.”

The 2015 Pisa results for the Pakistani schools were not released by the KHDA.

DSIB executive director Fatma Belrehif said the Indian schools showed an improvement in promoting inclusive education for children with special education needs. Fifty-eight percent of Indian schools have been judged as “generating good or better progress for students with determination,” according to the report.

“This is a topic of paramount and national importance,” said Ms Belrehif. “We are seeing a lot of our schools having a very embracive culture, very welcoming. Some schools have lower abilities in terms of really including, but they are on the journey. That’s the good news. I don’t have any school that really denied admission. That sort of culture I don’t see anymore.”

But a number of areas for improvement were identified, including Arabic attainment and progress and Islamic education.

“You don’t want them to learn the language just for the sake of more words and synonyms in the dictionary, but it is for them to see it functional, to see it applicable in their daily lives, so that is really the difference,” said Ms Belrehif.

Each school’s report is published on their respective websites and on the KHDA’s website.


The inspection reports for the remaining 160 private schools that deliver other international curriculums are still being compiled and their rankings will be released later this year.

15,000 jobs will be created for Emiratis in private Sector