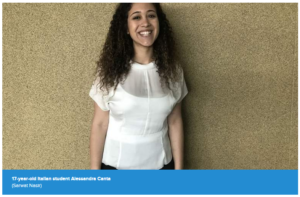 She was rejected by two different US ivy league schools before finally getting her acceptance letter from Harvard.

Alessandra Canta didn’t know a word of English four years ago when she first moved from Italy to Dubai. Today, she has been accepted into Harvard University and is planning on becoming a neurosurgeon.

She was rejected by two different US ivy league schools before finally getting her acceptance letter from Harvard. She insisted that rejection is part of the process and students shouldn’t be discouraged.

The 17-year-old Italian student spoke to Khaleej Times on the sidelines of a conference by Hale Education Group on Saturday, a US university admissions consultancy firm in the UAE, where five students spoke about the process and challenges of being accepted into US universities.

“I had lived in Italy my whole life and when I moved here four years ago, I didn’t know any English. I started watching movies in English and started reading English books, and I started picking up the language. Four years ago, I wouldn’t have imagined I would be going to Harvard. My plan was always to move back to Italy,” she said.

“I had applied to 14 universities in total and when I got my first letter, it was a rejection letter my MIT (Massachusetts Institute of Technology). That was my hardest time ever. From there I thought I wouldn’t get into any of the universities. But now that I look back, I see that it’s all of part of the process and university admission officers don’t reject you because you’re not good enough, but because that wouldn’t be the perfect fit for you.”

The students spoke about how waiting for university acceptance or rejection letters, managing your time properly and doing extracurricular activities are all part of the US university application process.

“I’ve been directly involved with charity since I was young. Since becoming my school’s charity committee head, I was given an opportunity to work with Dubai Cares and that’s definitely helped with university applications,” she said.

Naim also visits a charity school in Pakistan every year, which was founded by her grandmother, and volunteers there. She encouraged students to take on charity work not only to improve their applications, but also to simply do some good.

Last week, Khaleej Times reported on a Greek student who was accepted into 12 US universities. Despoina Loukos had encouraged students to place an equal focus on extracurricular activities as well as on studies. She had insisted that universities welcome applications of “well-rounded students”.