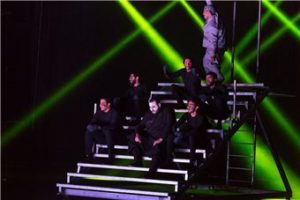 DUBAI, 10th June, 2017 (WAM) — In the run up to the 11th edition of the Dubai Festival for Youth Theatre, Dubai Culture and Arts Authority, Dubai Culture, has announced the new festival programme for 2017 and 2018.

This year, the programme will be launched afresh with a new series of initiatives, including 10 specialised academic workshops covering various aspects of theatre and supervised by experts from the Higher Institute of Theatrical Arts in Cairo.

During the workshops, which run from July to November, the participants will be motivated by a range of new competitions. These include a theatrical composition contest under a ‘Year of Giving’ theme, and a best text award that will see the winner’s work produced during the Dubai Festival for Youth Theatre 2018.

In addition to the workshops launched in 2017, a new and more comprehensive strategy is being developed for the 2018 edition, which will include international theatre performances, field visits for young artists to learn about best theatre practices in other Arab and international countries, and intellectual seminars and forums that will develop the UAE performing arts sector and discuss the challenges faced by young artists and local theatres.

Further competitions and awards will also be launched in 2018, when there will be a focus on integrating people with determination into the theatre through training and work experience Dubai Culture is developing the comprehensive 2018 strategy to support the growing requirements of the performing arts sector in the Emirate of Dubai, the UAE, and the wider region. This year, the authority will conduct a series of workshops in order to assess the theatre’s contribution to the sector and develop solutions in collaboration with the specialised committees who have supported the festival for the past ten years.

The Authority seeks to prepare the next generation of young artists in an academic and practical way, in line with global best practices and according to the outputs of the theoretical and practical workshops hosted this year.

Fatima Al Jallaf, Head of Dubai Festival for Youth Theatre and Acting Events Manager, said, “We are proud of the festival’s achievements which managed to establish its reputation as the ideal platform for ambitious drama enthusiasts in the UAE. In this year’s format we are focusing on the academic development of the participant’s talents. This is reflected by our programme of workshops and lectures, which are designed to provide a sound education across various aspects of theatrical production. The festival has grown exponentially to become a major event for both the established and budding theatre community in the UAE, with our emerging talent workshop allowing new talents to seek the guidance of specialised theatre artists.”