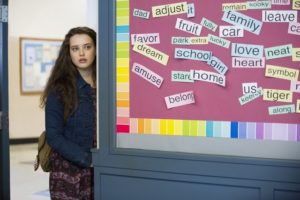 Actress Katherine Langford in 13 Reasons Why, a drama about a teenager who commits suicide. AP Photo

ABU DHABI // Parents and teachers have raised concerns over the controversial Netflix series 13 Reasons Why, which depicts the rape and suicide of a teenage girl.

The series has become a cult hit with young people, at a time when the issue of teenage suicides linked to social media abuse has been making headlines across the globe.

A spate of suicides have also been reportedly linked to playing “the Blue Whale” app, a game in which participants are assigned a master and coerced into completing challenges over 50 days, including watching horror films and self-harming, before being told to take their own lives.

Collegiate American School in Dubai sent a letter to parents about the app and one parent of a child at British School Al Khubairat in Abu Dhabi commented on Facebook that her son’s friend had accessed the game.

After teachers at the school overheard children discussing the app, parents were warned of the potential dangers.

“It’s important parents are aware of the dangers in the online world. Children can access material that parents might not approve of, or be aware of,” he said.

Since 15 year-old Al Khubairat pupil Louis Smith took his own life in 2013, the school has been taking a proactive stance in tackling mental health issues.

“Twice this year we brought over a UK child protection training consultant, Robin Watts, to talk to teachers and parents,” Mr Leppard said.

In America, after a spate of cases of teenagers live-streaming their suicide attempts, Mark Zuckerberg announced earlier this month that his Facebook social media business would hire 3,000 more people to review videos of crimes and suicides.

Schools in the UAE have also been responding to concerns about 13 Reasons Why, where a boy receives tapes from his classmate to explain why she took her own life. The show also explores mental health, peer pressure, bullying, and sexism.

The Canadian International School in Abu Dhabi and Al Khubairat both issued warnings to parents about the show, and Abu Dhabi’s American Community School included an article about it in its weekly newsletter.

However, the father of Louis Smith, Ross Barfoot, who co-founded the Louis Smith Foundation to help support teenagers struggling with mental health issues, claimed there was a misconception that talking about suicide encouraged it.

“It is good that topics such as bullying and teenage suicide are being discussed, but this has highlighted the risk of younger children being exposed to these topics without being educated about them first,” he said. “The show is 16+, and it should be parents’ responsibility to ensure that their children watch only age-appropriate shows.”

Katie Marie, an American teacher in Abu Dhabi who lost a sibling to suicide, said she would not want her pupils to watch the show.

“Teenagers are especially susceptible to reckless ideas that they get from media or peers. If a parent chooses to let their child watch the show, they should watch it together and have an open discussion about the show afterwards,” she said.

American Abu Dhabi resident Gina Dillon said her 13-year-old son watched the show a month ago, without her permission, then she watched it, too.

“I wish he’d never watched it. He’s too young,” she said.

However, she said, there were pros and cons to the show. “It points out the ramifications of teen choices. In one way I want to shelter him from this part of life and, on the other hand, I know I need to prepare him.”

• Don’t be afraid to ask a child if they have thought about suicide or if someone is hurting them. Raising the issue of suicide does not increase the risk or plant the idea. On the contrary, it creates the opportunity to offer help.

• Listen to your child’s comments without judgment. Doing so requires that you fully concentrate, understand, respond and then remember what is being said. Put your own agenda aside.

• Get help from a school-employed or community-based mental health professional if you are concerned for your child’s safety or the safety of one of their peers.