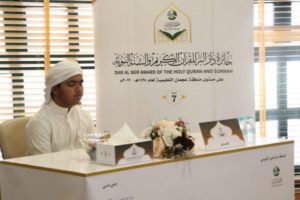 The annual competition, organised by the Dar Al Ber branch in Ajman in collaboration with the education zone, has seen 1,500 male and female participants, according to Khalid Abdulwahhab Al Khajah, branch manager and Chairman of the award’s supreme organising committee.

“641 students passed the initial tests which started early this month, and are to sit the final tests scheduled to conclude at the at the centre of Culture, Youth and Community Development Ministry in Ajman on May 11th,” he said.

“There are four arbitration committees for both male and female sections,” he added.