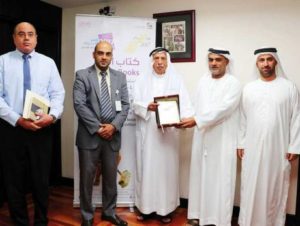 Dubai: Dubai Municipality has been honoured for donating 5,000 books collected from employees and customers to charities, the civic body said on Monday.

Juma Al Majid, president of Juma Al Majid Centre for Culture and Heritage recently honoured the Municipality’s Waste Management Department in recognition of its efforts in implementing the “Book Charity” initiative, it said in a press release.

Through the “Book Charity” initiative, 5,000 used books were handed over to the centre, to be distributed to charities. The centre will sort and classify the books facilitating them to be reused by needy people inside and outside the UAE.

“The “Book Charity” initiative was an affirmation of the key role played by all organisational units in Dubai Municipality in promoting values of community responsibility and philanthropy. The initiative was launched in conjunction with the activities of the Month of Reading, which was set to be held in March each year,” said Abdul Majeed Abdul Aziz Al Saifaie, director of Waste Management Department.

“The Month of Reading is a community initiative aimed at making maximum use of the abandoned books for charity works inside and outside the country with fruitful and constructive coordination with Juma Al Majid Centre for Culture and Heritage. Its fame has even spread globally as it has been contributing towards establishing the culture of philanthropy and promoting the values of community volunteering to donate used books of all types and categories to employees and the public,” he said.

“As for how to collect books, we have allocated boxes that allow employees and customers to donate their books in a number of locations such as Dubai Municipality Centres at Al Twar, Al Kafaf and Al Manara and at a number of public utilities of Dubai Municipality. In addition to that, a number of educational and charity institutions such as Mawakeb School and Dubai Charity Association participated in this initiative,” said Al Saifaie.

He added that the “Book Charity” initiative will continue until the end of the year as the Waste Management Department is expanding it with the participation of many local government departments and private organisations.