SUC graduates consisted of 30 nationalities at the 26th Graduation Ceremony 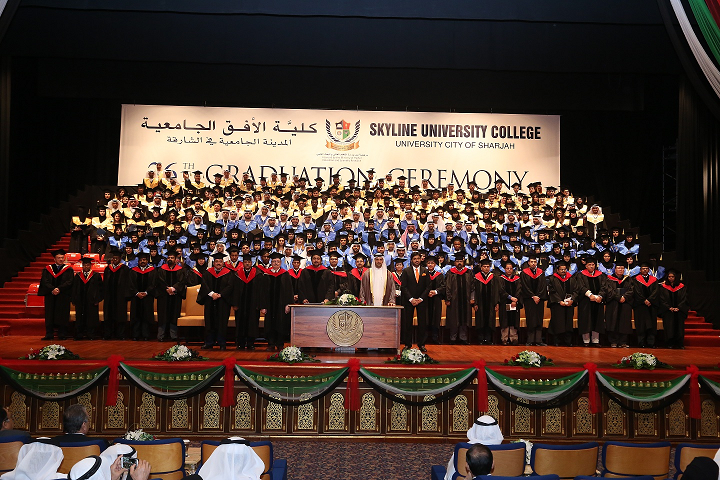 The highlight of Skyline University College (SUC) 26th graduation ceremony was the dynamic and diverse crowd that filled the University City Hall, Sharjah on November 24, 2016. SUC, an institution that persistently pursuing its vision of academic excellence with the aim of developing knowledge, skills, competencies, and value-based education in UAE has graduated 329 BBA and MBA students of more than 30 nationalities. Among the graduating students are officials from various departments and ministries across the UAE including the Ministry of Presidential Affairs, police departments, executive council offices, and numerous corporates who triumphantly finished their degrees at SUC. The chief guest of the ceremony was H.E. Sheikh Sultan Bin Ahmed Al Qassimi, Chairman of Sharjah Media Corporation and Member of the Sharjah Executive Council, UAE.

Keeping in mind the UAE leaders’ advocacy of promoting tolerance in the region, SUC for the past 26 years has been practicing the spirit of tolerance in its community of 60 nationalities and more than 30 of which are graduates of the academic year 2015-2016.  The graduates symbolize SUC’s diversified student body and are living proofs that the value of tolerance, respect, and acceptance are vividly portrayed and represented in this year’s graduation ceremony. Also merging with these 30 nationalities are two pairs of Emirati siblings who graduated on this day.

The ceremony kicked off with the UAE National Anthem followed by the Quran recital by Moaaz Mahmudul Hassan.

Afra  Saif Mohamed Ali  Alteneiji, Master of Business Administration with Emphasis on E-Governance, Summa Cum Laude said in her speech, “We believe that in order for us to grow as well-groomed professionals, we need to constantly learn to dance in the sway of this changing world that we live in. SUC has taught us that innovation and creativity are two of our greatest weapon to stand out in the fiercely competitive industries of today. This milestone is indeed a testament of our hard work and determination to reach this very day. We pay tribute to our professors who have tirelessly taught, guided, and provided us with good education. We honor the inspiration we received from our parents and from the people in the government and corporates who have shared with us their stories and journeys through workshops and lectures at SUC.”

Following the conferral of degrees, Mr. Kamal Puri, Founder President of Skyline University College delivered his speech saying, “Through innovation, good entrepreneurship, and multi-cultural environment, SUC has come a long way since the day of its inception. We have humbly merged 60 different nationalities in one institution and proved that races and culture differences is not a hindrance to acquire a proper education. This is rather a secret ingredient to broaden the knowledge of the students and see things in ways that no one has ever seen. Thus, SUC has consistently instilled innovation and entrepreneurship to the students who have learned to explore things in different perspectives over the course of their higher education journey. We stand proud to witness our graduates embark on a whole new journey and watch them prosper in their lives.”

Prominent guests such as ambassadors, consul generals, government officials, VIPs, media and corporate leaders attended the ceremony to witness this remarkable milestone in the students’ educational pursuit. Business leaders, principals, counselors from leading schools in UAE as well as parents of the graduating class graced the occasion with great anticipation.

Congratulating the graduating students, SUC Dean, Dr. Amitabh Upadhya told the students that now is the real test of their mettle when they join the real workforce and apply the knowledge, skills, and competencies that they have acquired at SUC. He wished them well and hoped they will all make SUC proud wherever they are.

Mr. Nitin Anand, SUC Executive Director and Chair of the Executive Council presented a memento to Chief Guest H.E. Sheikh Sultan Bin Ahmed Al Qassimi as a gesture of appreciation for his gracious presence. The award ceremony concluded with a vote of thanks to the Chief Guest and other dignitaries for their sincere participation in the event.