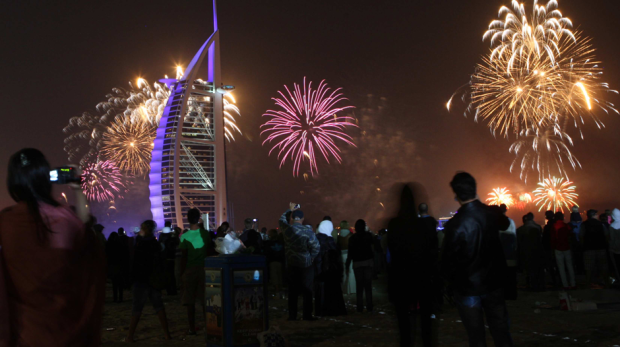 Use our guide to the UAE’s public holidays to plan your 2018.

Here is our guide to the UAE public holidays scheduled for 2018 in the UAE. Those working in the public sector can expect more days off than those in the private sector. All public holidays are paid, and may not count towards an employee’s annual leave.

New Year’s Day is fixed on January 1 to celebrate the dawn of the new Gregorian year. The UAE joins the global party with fireworks, parades, and parties. Every year, the Burj Khalifa is the centerpiece for one of the greatest firework displays in the world.

In 2018, New Year’s Day falls on a Monday, so it won’t be a long weekend unless you book the 31st of December off. Plan well in advance.

Al Isra’a Wal Mi’raj is an Islamic holiday, which is observed annually on the 27th day of the Islamic month of Rajab, according to the Hijri calendar. The holiday marks the night Allah took Mohammad (PBUH) on a journey from Makkah to Jerusalem, and then to heaven. The journey was made in a single night, hence the name.

Roughly translated, Eid Al Fitr means “festival of breaking the fast”. The holiday is a celebration which marks the end of Ramadan (which is forecast to end on June 15 or 16). It is a time to show kindness to others and love for Allah.

Eid Al Fitr begins automatically after the last day of Ramadan, on the first day of Shawwal. Holidays vary between one or two days from the start of Eid Al Fitr.

June 15 and 16 fall on a Friday and Saturday respectively.

Arafat Day is the second day of the annual haj (or pilgrimage). The holiday takes place the day before the start of Eid Al Adha. At dawn, Muslim pilgrims make their way from Mina to a nearby hillside called Mount Arafat and a plain called the Plain of Arafat.

Eid Al Adha translates to the “festival of sacrifice”. The holiday honours Ibrahim and his willingness to sacrifice his son Ismail for Allah. Ismail is happy to oblige before Allah sends his angel, Jibra’il, to inform Ibrahim that he has already accepted the sacrifice from his heart.

Al Hijri is the Islamic New Year. Expected to fall on Tuesday, September 11 in 2018.

The birthday of Prophet Mohammad (PBUH) is celebrated on the 12th day of Rabi Al Awwal. In Arabic, the holiday is referred to as Eid Al Mawlid an Nabawi.

Commemoration Day (sometimes referred to as Martyr’s Day) is a public holiday on November 30. The day was declared by His Highness Shaikh Khalifa Bin Zayed Al Nahyan, President of the UAE, in 2015 to honour Emiratis who have died for their country.

The remembrance will fall on a Friday in 2018.

Abu Dhabi, Dubai, Sharjah, Ajman, Umm Al Quwain, and Fujairah made up the original UAE, with Ras Al Khaimah joining in a year later in 1972. 2018 will be the UAE’s 47th birthday.

One or two days are granted as public holidays, and as December 2 is a Sunday, we could enjoy a long weekend.

Dubai to ring in 2018 with Burj Khalifa laser show

Uncovering Abu Dhabi’s science and technology leaders of the future